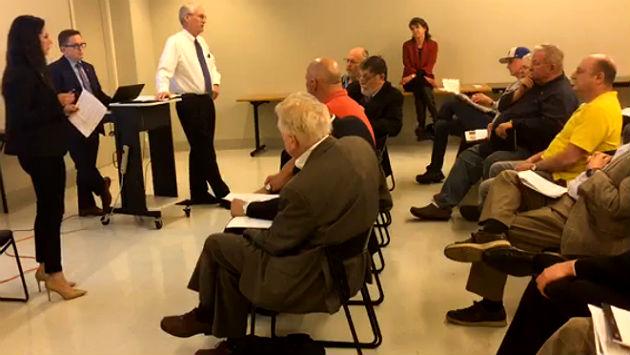 Fisher, the last remaining new car dealer in town, said if that happens, “Me and thousands of other small business owners will be out of here. Guess what you’ve created then? Detroit.”

“So instead of the property being more valuable, you’ll have made all of our property worthless,” Fisher added.

Fisher conceded that with the increases in assessed values across the city the tax rate used should decrease substantially, but he and other business owners in the room at the Evanston Public Library seemed less than convinced.

Deputy Assessor Don Meyer said determining what actual changes in the tax bills will be “is a complex issue” — but that if all properties increase by the same percentage and the amount taxing bodies levy in taxes remains the same, there’d be no change in tax bills.

Video of the commercial property owners’ meeting, from Dan Coyne.

Scott Smith, chief communications officer for the assessor’s office, said the county is only at the beginning of the process of determining the tax bills that will be due in August of 2020 — the first to which the new assessments will apply.

Next there will be appeals, first to the assessor’s office this month and later this year to the Board of Review.

Then the state will apply an equalization factor to the assessed values and the several taxing districts in Evanston will set their levy — the amount they need to raise in property taxes. Then the county clerk’s office will calculate tax rates based on those levies, and the county treasurer’s office will mail out the tax bills.

Meyer and other assessor’s office officials declined to offer specific projections for what the end result might be.

But at Monday night’s City Council meeting, the city’s chief financial officer, Hitesh Desai, suggested that if appeals did not reduce total property values, and if the state equalization factor didn’t change, and if taxing bodies didn’t increase their tax levies, the tax rate might decrease from the current 9.006 percent to 5.6 percent.

He provided examples to suggest that such a scenario could lead to sizable property tax reductions for most Evanston homeowners.

Whether that disparity will hold up will depend in part on how successful homeowners and commercial property owners are in appealing their new assessments. The deadline for filing appeals with the assessor’s office is next Monday, April 15.