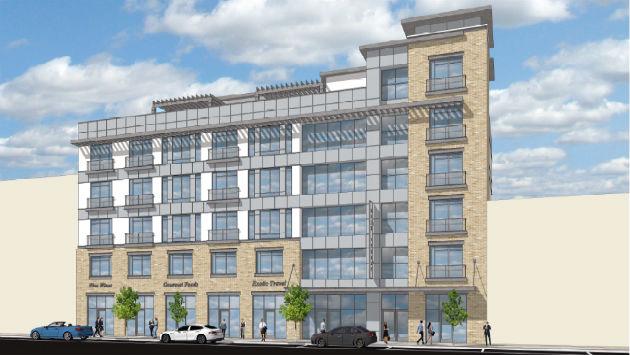 Plans for a six-story apartment building with on-site affordable housing drew fire Thursday night from merchants who said they feared losing the customer parking provided by what’s now a city parking lot there.

Shaun Chinsky, who owns the buildings across the street at 706-712 Main, said at the joint 3rd and 4th Wards meeting held at Lincoln School that his tenants are very concerned about the loss of parking and that the proposed six-story building would be overwhelming.

But he said he wouldn’t be opposed to building something on the lot if it included parking.

Jerry Eddinger of Hallmark & Johnson Properties, which owns the building at 717-719 Main, said retailers on the block don’t want housing there and that the tough retail climate makes it unlikely that the additional ground-floor retail space planned for the building would succeed.

The city’s parking manager, Jill Velan told the Transportation and Parking Committee last month that there is ample parking in the area — including two other underutilized city lots less than a block away.

The building that once stood at 727 Main, in a still from a 1948 Coronet Instructional Films production.

The missing tooth in the Main Street commercial strip that now is the parking lot at 727 Main had been a two-story commercial building until it burned in 1959.

Developer Martin Murray, standing in the light cast by a projector.

Developer Martin Murray told the crowd, “We don’t have to do the Main Street parcel.”

He explained that the developers approached the city with plans to build 40 townhouses around the corner at 912 Custer, the site of the Dard Products factory and warehouse. Dard has listed the property for sale and plans to relocate.

The developers said it wouldn’t be feasible to include on-site affordable housing in the owner-occupied townhouse development because of the high carrying costs for the relatively large units.

A rendering of some of the proposed townhouses.

To achieve the city’s goals of producing more on-site affordable housing and generate additional revenue for the cash-strapped city with the sale of the parking lot, the developers agreed to also propose development of the parking lot site, which could include affordable rental apartments in a range of sizes.

Murray also indicated the development team would be open to the idea of substituting more ground level parking for the planned retail space in the Main Street structure.

Alderman Don Wilson, 4th Ward, stressed that the development concept was still in the very early stages. “We’re before the beginning” of the formal review process, the alderman said, adding that it was important to give residents and business owners a chance to weigh in on the plans very early.

“I want to enhance this neighborhood and improve things for the businesses,” Wilson said. “If the development won’t do that, I won’t support it.”