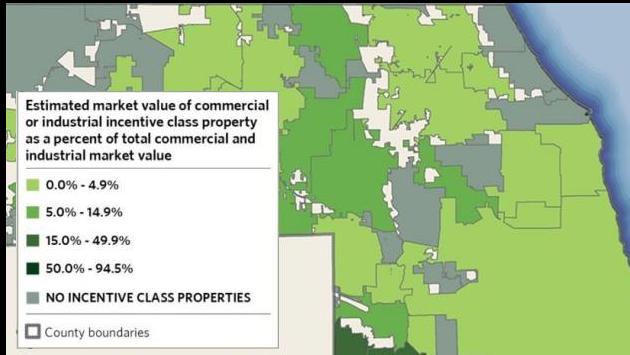 And a new study by the Chicago Metropolitan Agency for Planning says their use is growing —  with the number of properties receiving an incentive class tax break increasing 35 percent between 2007 and 2011.

The value of properties with those tax breaks increased from 3.5 to 5.8 percent of the vallue of all commercial and industrial land in the county during the same time period.

Ward Manufacturing has received a Class 6B property tax incentive. It reduces the business's property assessment from 25 percent to 10 percent of market value for 10 years, with smaller reductions before the rate returns to the normal level after the 12th year.

The tax break was approved to help the long-time Evanston stamping plant at 2230 Main St. expand into a vacant building next door.

In addition the city has agreed to a property tax rebate deal for the 415 Howard St. rental high-rise apartment development.

This agreement, made at the start of the Howard-Ridge tax increment financing district, provided for reimbursment of property taxes to the owner once the property reached 90 percent occupancy.

That target was reached two years ago, Lyons says, and the city has been paying the incentive since then .

The deal calls for a 100 percent rebate of property taxes for the first five years, with the rebate gradually phased out over an additional seven years.

The CMAP report says that the higher tax rate imposed under state law on commercial and industrial property only in Cook County encourages widespread use of property tax incentives by municipalities in the county. And it suggests that the classification system "impedes economic development in many communities in Cook County."