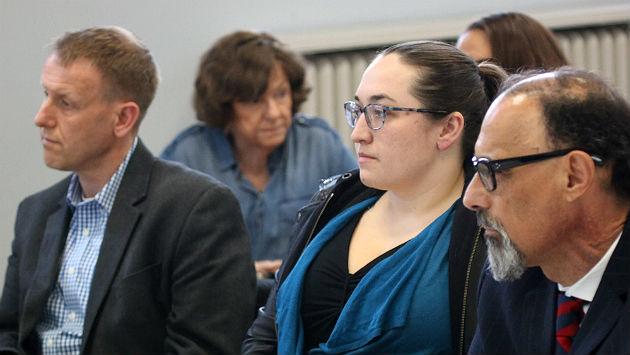 Revised plans for the proposed Palmhouse event space on Howard Street won approval from Evanston’s Design and Project Review Committee this week — but not without some concern about the name of the zoning category it falls under.

It’s a “banquet hall” under the city’s zoning code, and after some fairly light-hearted concern expressed by the venue’s operators about the old-fashioned sound of that term, Community Development Director Johanna Leonard suggested the classification could be due for a name change.

“Maybe you can have the distinction of being the last ‘banquet hall’ approved in town,” Leonard told members of the Palmhouse team, including Mohamed Eldibany, the contract purchaser of the former Sherwin-Williams paint store at 619 Howard, India McKay of the Peckish Pig restaurant across the street and Thomas Ahleman of Studio Talo Architecture.

On more substantive matters, the Palmhouse representatives presented revised drawings for the space, reducing occupancy limits to fit the city code, eliminating a pair of garage-style overhead doors to the parking lot that city staff had worried would cause sound control issues during events and said they had confirmed they could rent ample off-site parking for large events at the parking garage at the Howard Street CTA station.

They have 21 on-site parking spaces and plan to provide valet parking for mid-size events and shuttle bus service for larger events that would use the parking garage.

The project next goes to the Zoning Board of Appeals for review next Tuesday and will also require City Council approval.

McKay said she hoped Palmhouse might ideally be open by the holidays, but, given the uncertainties of renovation work, their more realistic goal is to open next spring.

A rendering of the planned Double Clutch Brewing Company at 2121 Ashland Ave.

At the same session, DAPR gave preliminary and final approval to renovation plans for an existing commercial building at 2121 Ashland Ave. that’s to be converted to a brew pub with an event space housing a display of classic cars.

A special use permit for that project was approved by City Council last fall.

Gary Gerdes, head of the city’s building and inspectional services unit, said the owners would have to scale down the size of their signage to get their sign permits approved, but few other concerns were raised about the plans.

Double Clutch’s owners say they hope to be in operation by January or February of next year.