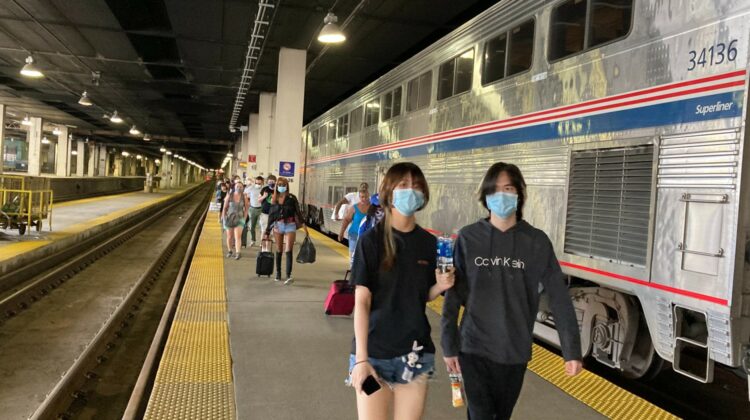 There have probably not been this many masked men on a train since Jesse James and his gang knocked off the Fast Mail in the 1870s.

But now, thanks to COVID-19, masked men — and women — are the order of the day on the nation’s passenger trains.

So I set out to discover how it’s going. After all, it seems almost every day that we hear about short tempers, fistfights and even assaults on airplane crew members over mandatory masking. But what is it like on the ground, where a cross country train journey can take two days, and where masks are also required?

I went to the heart of the latest COVID-19 surge, our neighboring state of Missouri, traveling from one of the most vaccinated communities in the United States (Evanston, where 78.6% of those 12+ are fully vaccinated) through places like Sedalia, Missouri (Pettis County, 36.8%), a rural train stop in mid-Missouri.

And I hear you. “Why,” you ask, “would anyone do something like this, even if you’re fully vaccinated?”

Well, I love trains. Have since I was a kid. And when I planned this journey a few weeks ago, to meet a fellow rail enthusiast, COVID-19 was on the decline, and delta variant sounded like an airline spin-off.

Also, I took precautions, splurging for a sleeping car room on the seven-hour Chicago-Kansas City leg, to avoid crowds in the sold-out coaches, not to mention possibly having to sit next to someone who may or may not have had their COVID shots. (Masks can be removed in private rooms).

There were no sleepers, however, on my other trains. But there were also no fights and no shouting. Everyone was following the rules. Crew members were friendly. Passengers were cooperative.

If it was “Show Me” in the “Show Me” state, people did. On the train, anyway.

But for a variety of social, economic and political reasons, off the train in Missouri it’s a different story, one of the lowest statewide vaccination rates in the nation, 48.9% for those 12 and over. Illinois, by comparison, is at 58.8% That’s a dichotomy seen often between red states like Missouri and blue ones like Illinois.

“I’m almost embarrassed to say what state I’m from,” says Missourian Barry Williams, regarding COVID numbers. “If I was [Gov.] Mike Parson and I had a conscience,” Williams says, “I’d be ashamed.”

Williams volunteers as a station host at the Kirkwood, Missouri, station, answering questions and providing directions for passengers at the suburban St. Louis County depot.

“It seems like people are being respectful and taking COVID seriously,” he says of train riders, and of those picking up or dropping off passengers.

But Williams says in other parts of Missouri, it’s a different story. “Missouri has a bad reputation nationwide,” he adds.

“There’s a real divide,” he says, “between the more educated, urban areas and the rural parts of the state.”

It’s similar in Illinois. The last leg of my trip saw me board an Amtrak train in rural, downstate Centralia. (I got a ride there from a friend). Centralia is in three counties, but Marion County, which has most of the town, has a 12+ full vaccination rate of only 37.3%.

One more comparison. I also rode the St. Louis light rail system, which, while much smaller than the Chicago ‘L,’ serves the same function.

Masks are required there as well, and transit compliance in St. Louis was generally good, with some blatant exceptions. There was a disheveled guy who was spouting off about how vaccines were a government plot. Then there was the mom who made sure her two young children had on their masks, then proceeded to pull hers down and make a cell phone call loud enough to be heard three towns away.

And, of course, wouldn’t you know it, on my Metra trip back from downtown Chicago to Evanston, there was a young woman across the aisle shouting into her cell phone as well.

So please, in Missouri or Illinois, if you can’t Show Me your vaccination card, at least Show Me some common courtesy.