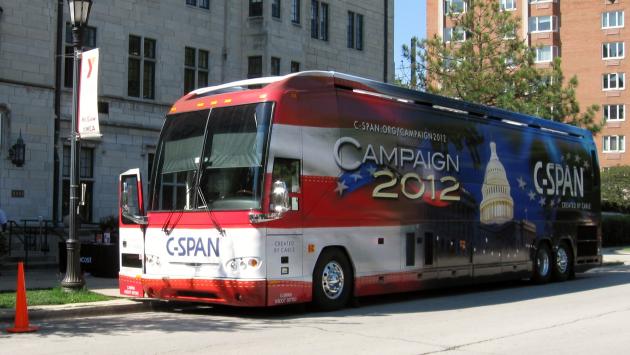 Regular viewers of C-SPAN are accustomed to seeing the big “Campaign 2012” bus show up at political rallies throughout the country.  On Tuesday, it made a two-hour stop in front of Evanston’s McGaw YMCA on Grove Street, giving the locals a chance to hop aboard for a brief tour.

The bus, on its way to Tampa for the Republican National Convention later this month, travels with two marketing representatives in addition to the driver, stopping wherever they find a presidential or vice-presidential candidate making an appeal to the voters.

In between events, the bus will stop at state capitals and communities, large and small, to promote the network and to give viewers a peek inside. 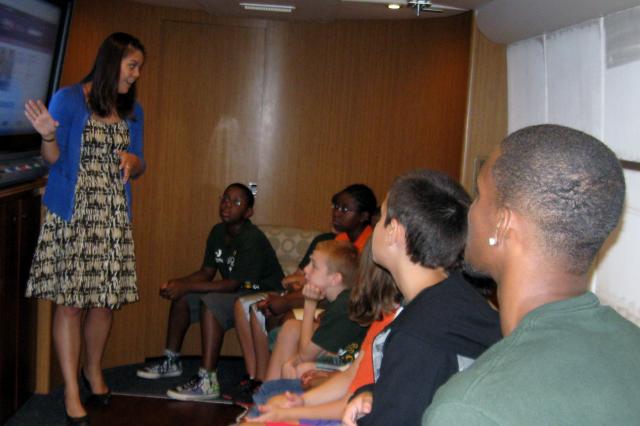 C-SPAN marketing rep Jennifer Curran explains the intricacies of the electoral process to a youth group from the McGaw YMCA.

Strictly non-partisan, C-SPAN (Cable-Satellite and Public Affairs Network) was created by the cable television industry in 1979 as a public service to broadcast the proceedings of the U. S. House of Representatives live.

Since then, it has expanded to cover both the House and the Senate as well as many of the Congressional committee sessions, where the legislative “sausage” is massaged into law. 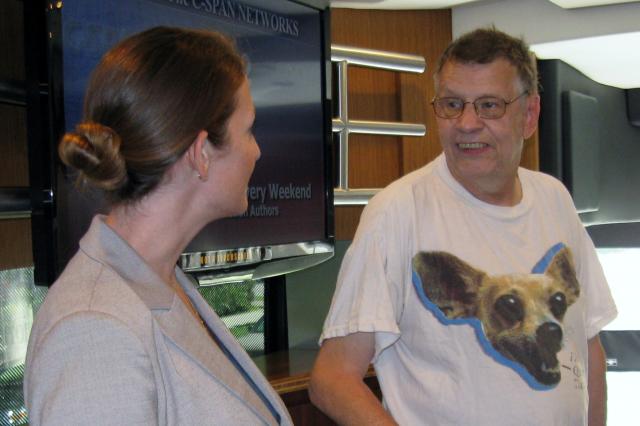 Marketing rep Jessica Lindquist introduces Evanstonian James Hedland to one of the interactive touch-screen devices on the bus.

Its signature political program, “Road to the White House,” was launched in 1988 to provide regular coverage of the candidates, issues, and events that shape presidential politics.

The bus became an integral part of that coverage and is decked out with a number of high-definition TVs and touch-screen computers that provide resources for educators, students, and first-time voters to explain the intricacies of the electoral process.

Its stops in the Chicago area were sponsored by Comcast, one of the network’s cable partners.

Top: The C-SPAN bus that was parked in front of the McGaw YMCA Tuesday from 10 a.m. until noon.