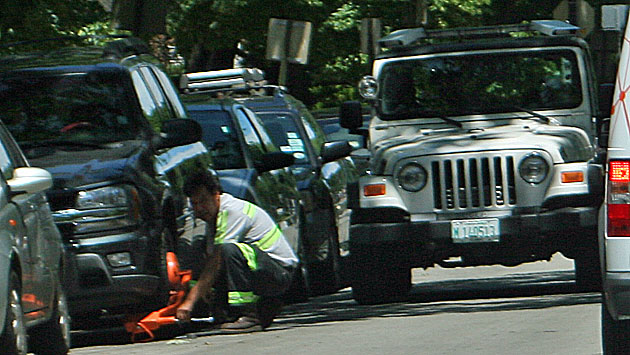 Parking Division Manager Rickey Voss says that after a few weeks of training, parking enforcement officers started using the Jeep-mounted cameras last Friday to spot cars that should be booted for unpaid parking tickets. He says they're now also starting to use the system to enforce two-hour parking limits.

He said results from the new system have been "good" so far, and promised to have a more detailed report available for next week's City Council meeting.

The parking division has cameras now on two of its Jeeps, and the city has a third system on a police car. That system, which the city won free use of for a year in a national contest for police traffic enforcement efforts, was used earlier this year to spot a stolen car just days after it was installed.

Top: A driver from city contractor North Shore Towing places a Denver boot on the wheel of a car with overdue tickets in the 1600 block of Hinman Avenue this afternoon that was spotted by the new camera system mounted on a parking enforcement Jeep.

Here's looking at you!