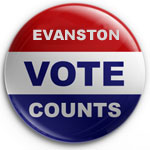 It's not just presidential candidates facing off this week. With the second presidential debate Tuesday, the next few days will also will see more candidates for local office meeting face-to-face.

The Central Street Neighbors Association has a session for state legislative candidates scheduled for 7 p.m. Thursday at Haven Middle School in Evanston.

The CSNA says it's invited both candidates in the 17th and 18th district state house races and the 9th District state senate race and that five of the six have agreed to appear.

The holdout is Daniel Biss, the incumbent state representative who's running for the 9th District senate seat.

Biss says he scheduled a community forum on the state's superabundance of local governments for the same time at Wagner Farm in Glenview months ago. Evanston Mayor Elizabeth Tisdahl will be standing in for Biss at the Thursday event.

Biss is scheduled to debate his Republican opponent, Glenn Farkas, twice over the weekend.

They'll be at an event Saturday, sponsored by the Evanston-North Shore Community Consortium, at 2nd Baptist Church in Evanston.

That event, which runs from 9:30 a.m. to 2:30 p.m., will be headlined by a meeting between U.S. Rep. Jan Schakowsky and her Republican opponent, Tim Wolfe.

Biss and Farkas will also face off at 2:30 p.m. on Sunday, Oct. 21, at Wilmette Village Hall, 1200 Wilmette Ave., in what the Biss campaign says will be their final debate of the campaign.