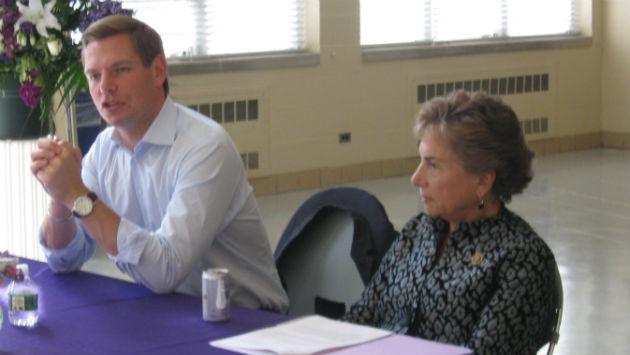 Even though the words “Clinton” and “Trump” were never uttered, the Presidential campaign for the Millennial vote centered briefly on Evanston Tuesday afternoon.

That’s when local Congresswoman Jan Schakowsky (D-Evanston) brought fellow Democrat Eric Swalwell (D-Calif.) to huddle briefly with fewer than a dozen students on the Northwestern University campus for a “listening session” about the concerns of Millennial voters.

In her introduction of Swalwell, Schakowsky referred to him as the leader of a group of 18 young Democrat congressmen called The Future Forum, which is engaged in bridging the gap between Congress and young Americans.

Swalwell, 35, of Dublin, Calif., was elected to Congress in 2012, representing the 15th Congressional district of his state. He refers to himself as a Millennial.

He said that Evanston is the 21st city he has visited on this “listening tour” of the nation’s young people, many of whom voted for Sen. Bernie Sanders in the Democratic primary campaign that was eventually won by former Secretary of State Hillary Clinton.

Earlier in the day, Swalwell and Schakowsky met with a similar group of students at Truman College in Chicago, which Schakowsky noted was also located in her congressional district.

While the small number of students the representatives met with at Northwestern was hardly representative of their generation, Swalwell said that, based upon his meetings with Millennials, their chief concerns were paying for college, and particularly in shouldering the burden of loans they received to finance their college education.

In fact, one of the attendees at the session was the Northwestern director of interfaith engagement, Tahera Ahmad, a 32-year-old Muslim woman who related her experiences last year aboard a United Air Lines flight from Chicago to Washington in which a flight attendant refused to serve her an unopened can of pop, declaring that “I might use it as a weapon.”

Her story, at the time, was widely circulated among the social media and resulted in an apology from United.

But it was financial issues that seemed to be the primary focus of the Northwestern students, one of whom said that affordable quality child care was also important to them as they marry and begin their careers after graduation.