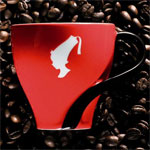 Downtown Evanston has launched a campaign to bring a 150-year-old Viennese coffee and pastry shop chain to the site of the former Borders store on Maple Avenue.

Downtown Evanston's Carolyn Dellutri says she "fell in love with" the recently opened Julius Meinl shop she visited on Southport in Chicago and she's launched a Facebook campaign to try to bring one to Evanston.

The company has begun an expansion into North America with three shops now open on Chicago's north side.

Dellutri says there was a big line at the Southport shop on a Saturday morning when she was there and she raved about her breakfast of "baked eggs with tomato, basil, goat cheese, spinach, mushroom and swiss."

The shop also features live entertainment on Friday and Saturday nights, and, Dellutri said that as Downtown Evanston works to create an arts and entertainment district, "I feel this would be an excellent addition to the mix of nightlife."

The city's economic development manager, Nancy Radzevich, says she thinks it would be a great idea, too.

“Given their extended hours of service and offerings of food and pastries," Radzevich says, "we believe this is an ideal location for such a unique, high end European coffee house."

"This brand will appeal to the residents, Metra and CTA commuters, day-time work force and visitors, as well the ‘after movie’ crowd,” Radzevich added.