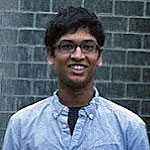 The program featured speakers from several student groups, university leaders and President Morton Schapiro, who called Harsha "an inspiration to us all."

President Schapiro evoked the spirit of Yom Kippur this week and the holiest day in the Jewish calendar to underscore his deep sorrow for the loss of Harsha to his family members, fellow students and community members, noting that he had prayed for Harsha all week and would continue to keep him in his heart and prayers.

Assistant Chaplain Tahera Ahmad said, "Although this week has brought grief and sadness, it made us realize that we are family, and Harsha was one of us. We will always remember Harsha for who he was, a great source of happiness, a great source of joy."

Under a nearly full moon, with the speakers bathed in lights and Deering Library as a dramatic backdrop, the crowd stretched across the width of Deering Meadow, standing more than 20 deep in many places.

The quiet assembly formed a semicircle around the Deering steps, where student leaders and speakers from the university, a representative of the family, and members of at least five different faith groups said prayers from the Hindu, Muslim, Christian, Jewish and Baha'i religions.

The South Asian student a capella group, Brown Sugar, sang a moving version of the Beyonce song, "Halo," with part of the lyrics in Hindi and Arabic, in honor of Harsha.

"We are one Northwestern," said Victor Shao, ASG president.

As the gathering came to a close, the community sang the University Alma Mater softly, with the strains of "Hail to purple, Hail to white" echoing across the meadow in the darkness before the crowd slowly dispersed.

Maddula went missing after leaving an off-campus party early Saturday morning. His body was recovered from Wilmette harbor on Thursday.

Authorities said there were no signs of foul play and his wallet, identification and cellphone were still in his pants pockets.

The Cook County medical examiner's office said Friday that Maddula had drowned, but reach no conclusion about whether the death was accidental.