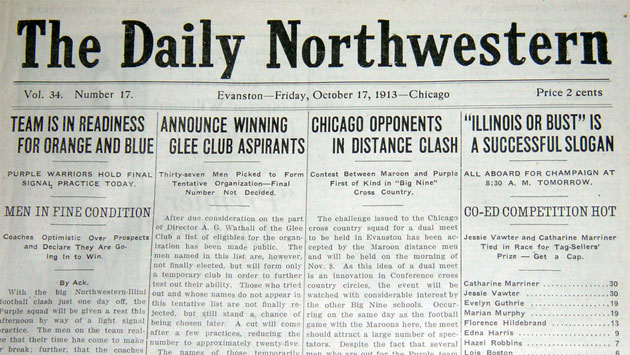 The preservation of more than 90,000 pages of Northwestern University history has just been assured thanks to a new agreement with NewsBank, Inc. to digitize the entire historical contents of The Daily Northwestern, the University’s student newspaper.

The preservation of more than 90,000 pages of Northwestern University history has just been assured thanks to a new agreement with NewsBank, Inc. to digitize the entire historical contents of The Daily Northwestern, the University’s student newspaper.

The project, scheduled for completion by early 2012, will capture the image of every page of the Daily Northwestern and its predecessor publications from 1871 to 2000 and also will make the contents keyword searchable.

The agreement provides for permanent online access to the paper for Northwestern faculty, staff, students, and more than 200,000 Northwestern alumni and alumnae anywhere in the world.

NewsBank, a major digital publisher of historical and current newspapers, will have commercial rights to market the digitized content. NewsBank President and CEO Dan Jones (KSM61) — who is a university trustee and president-elect of the Northwestern Alumni Association — called the project “a prototype for the future of historic college newspaper content online.”

Jones approached Students Publishing Company (SPC), the Daily Northwestern’s parent company, with the idea of digitizing its contents more than a year ago, after SPC General Manager Stacia Campbell mentioned to him that alumni regularly stop in the newsroom to read through past papers. “Most leave wishing they could spend more time reading through The Daily and re-visiting their NU experience,” she says.

SPC joined forces with Northwestern University Archives to gather together all issues of the Daily. “The project is happening not a moment too soon to save an incredible source of historical information,” says University Archivist Kevin Leonard. “Much of the original paper and the microfilmed version had deteriorated to the point where the content was in serious danger of being lost forever.”

“For some time we have wanted to preserve and make available this great historical material,” says Dean of Libraries Sarah Pritchard. “We’re excited at this unique opportunity to do it with the leadership of one of our own alumni and the resources of a premier newspaper digitizing company like NewsBank Inc.”

Top: The front page of the Daily Northwestern from Oct. 17, 1913, reports on preparations for a football game with the University of Illinois.