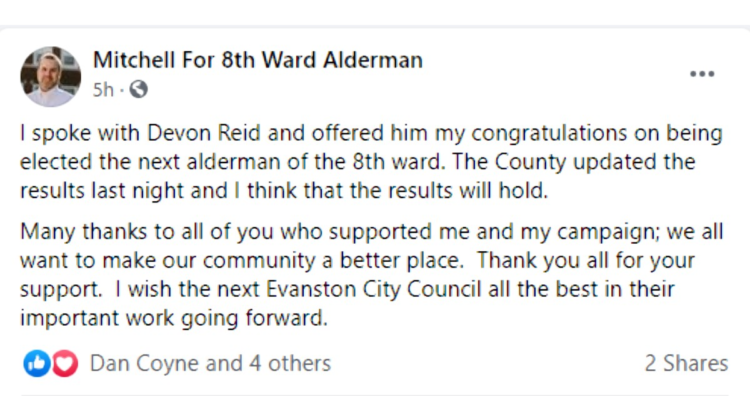 While more late-arriving ballots could still be counted, the candidate who is trailing in the race for 8th Ward alderman in Evanston has conceded to his opponent.

In a Facebook post today, Matthew Marley Mitchell said, “I spoke with Devon Reid and offered him my congratulations on being elected the next alderman of the 8th Ward.”

Mitchell stated that the Cook County Clerk’s Office updated the latest vote totals last evening, and said “I think that the vote will hold.”

Since Wednesday afternoon 106 additional votes had been added to the vote totals in the ward, but the spread between the two candidates had only shrunk from 46 to 42 votes.

While ballots postmarked on Election Day (April 6) are counted if they arrive at the Clerk’s Office by April 20, experience from past elections indicates it’s unlikely the votes remaining to be counted will flip the outcome.

There were two other races on Election Night which were too close to call at that time. In the 1st Ward, Clare Kelly’s lead over incumbent Judy Fiske has shrunk to 30 votes from 39 on Wednesday. That’s less than the 8th Ward margin, but still a tall order to overcome through remaining mail-in ballots.

The other close race, however, is now not as close as before. In the race for the final seat on the Evanston/Skokie District 65 Board of Education, Donna Wang Su’s lead over Marquise Weatherspoon is now 111 votes, compared to 46 votes on Wednesday.

After the election, Weatherspoon had posted that she was not giving up yet, but at the time of that post Su’s lead was less than half of what it is now.