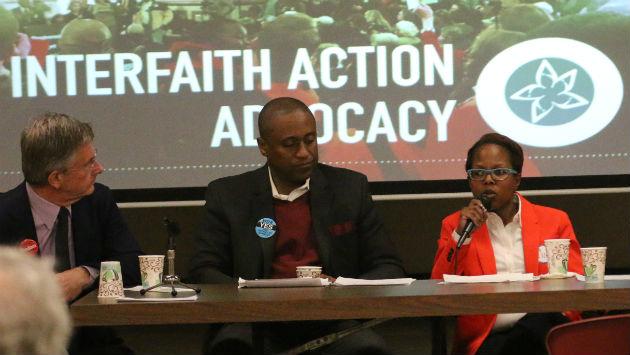 The ordinance that limits occupancy of dwelling units to no more than three unrelated adults — sometimes referred to as “the brothel law” — came in for the sharpest criticism.

Jones said the law has been used for political and retaliatory reasons — and mostly to attack students living in party houses near Northwestern University.

“Well, we have other laws that we can rely on to stop noise, trash, whatever problems we have there,” Jones added, saying the law has been selectively enforced. “Only landlords we don’t like have to deal with this.”

The other candidate in the 9th Ward race, Cicely Fleming, said she agreed that “the brothel law” should go. 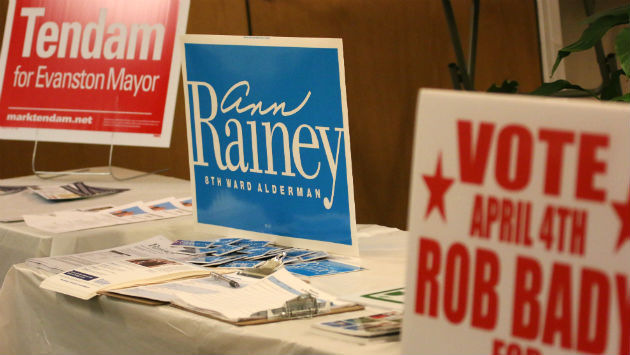 Campaign signs and literature on tables at the meeting.

Alderman Mark Tendam, 6th Ward, who’s running for mayor, said he’d like to strike the entire ordinance. “It’s a NIMBY-motivated kind of thing,” Tendam said, adding that the only downside of repeal would be that Late Show host and NU grad Stephen Colbert “would be out of some jokes.”

Rob Bady, running for 8th Ward alderman, said he also favored repeal. “I’m not in any fear of the frat boys,” Bady said.

And retired Community Development Director Jim Wolinski, speaking for Alderman Ann Rainey, 8th Ward, who couldn’t be at the meeting because of a scheduling conflict, said Rainey favored repeal as well. She has “no problem” with up to six unreleated adults living in a three-bedroom apartment, Wolinski said.

Daniel Ruen, pastor of Grace Lutheran Church, which hosted the meeting for Interfaith Action, said, “We want to move on this issue, we’ll fill city hall to change that law.”

The three-unrelated rule, which was first adopted decades ago, has sparked controversy at least since 2010 when city officials announced plans to more intensively enforce it. Some older residents living near the NU campus have strongly supported it and an intensive effort to try reform the ordinance in 2013 ultimately went nowhere.

The candidates at the meeting also generally voiced support for changes that would remove unit size restrictions that serve as a barrier to building “tiny homes” in the city and on rules that prevent homeowners from using existing coach houses as rental units or creating accessory new “granny flat” units on their properties.

“Every ward should have one tract or two where we can place micro-housing, small modular homes,” Jones said, “All we’ve got to do is change the zoning laws and the developers will come. If you can put four homes on a lot, they’ll be much more affordable.”

And Fleming said she’d been disappointed to learn that, though her house is on an over-sized lot, she couldn’t, under city rules, build an accessory unit on the property that could be a home for her mother.