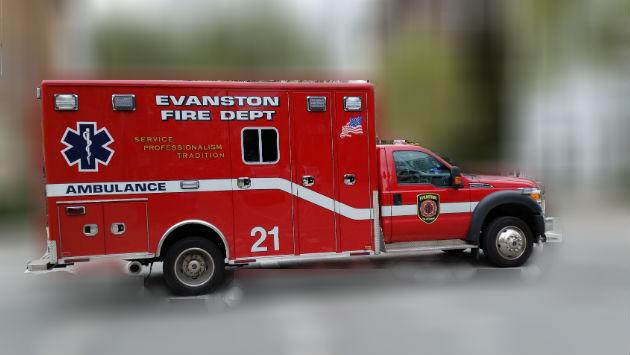 A suspect in an auto burglary this morning in Kenilworth has been transported to Evanston Hospital after he struggled with Kenilworth and Wilmette police attempting to arrest him at the Central Street Metra station in Evanston.

Evanston Police Cmdr. Ryan Glew says Evanston officers were called to the scene to assist, but didn’t arrive until after the arrest had taken place.

In addition to the driver, there were four passengers in the car, including a four-year-old child.

During the stop the driver failed to produce identification, Miller says, and then sped off down Kenilworth Avenue.

Miller says police did not pursue the car, because the stop was for a minor traffic violation and out of concern for the safety of the child.

But they found the vehicle about five minutes later parked at Rosyln Road and Melrose Avenue. By the time officers got there, the driver had fled on foot, but the passengers were still inside.

Then, about 4:45 a.m., Wilmette Police Chief Kyle Murphy says his officers discovered a burglary to an auto repair shop in the 1200 block of Green Bay Road.

He says someone had broken out a rear window at the business and apparently had cut himself, leaving behind a substantial amount of blood.

A short time later a Wilmette officer noticed a man on a southbound Metra commuter train who matched the description of the driver from the Kenilworth incident. Wilmette police ordered the train to stop and boarded it at Central Street in Evanston.

Murphy says officers found the suspect bleeding with cuts on his arms, and that he resisted arrest, battering officers and trying to remove one officer’s gun from its holster.

The suspect, now identified as Davontay Thomas, 20, of 1743 East 68th St. in Chicago, was taken to Evanston Hospital where he was treated for his cuts. He’s now been charged with burlary, attempt to disarm an officer and aggravated battery to two officers.

He’s scheduled to appear in Skokie district court at 1:30 p.m. on April 6.

The incident led to several news helicopters flying over the north end of Evanston starting about 5:45 a.m., and it also caused delays for some Metra Union Pacific North line trains this morning.