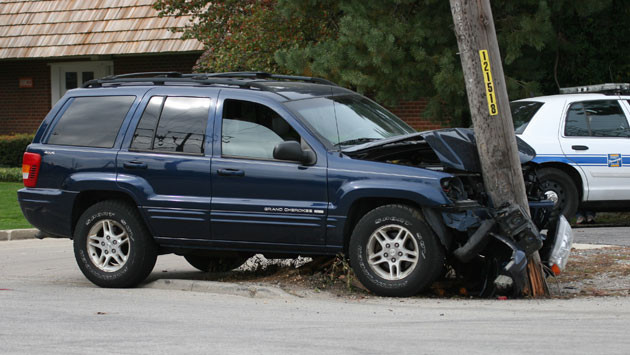 A Jeep Grand Cherokee slammed into a utility pole on Greenleaf Street in Evanston about 1:30 this afternoon.

Fire officials say the driver of the car managed to walk away without injuries from the wreck.

But the accident, which occurred in the block between Grey and Hartrey avenues in west Evanston, left the pole, which carries power for several businesses in the area, broken off from its base and tilted at a sharp angle.

A ComEd truck arrived on the scene about 1:45 p.m. and ComEd's website said power to the handful of customers affected was expected to be restored by about 4:30 p.m.

Update 3:30 p.m.: Police Cmdr. Jay Parrott says the driver of the car, a 62-year-old woman from Wilmette, was issued a citation for failure to reduce speed to avoid an accident.