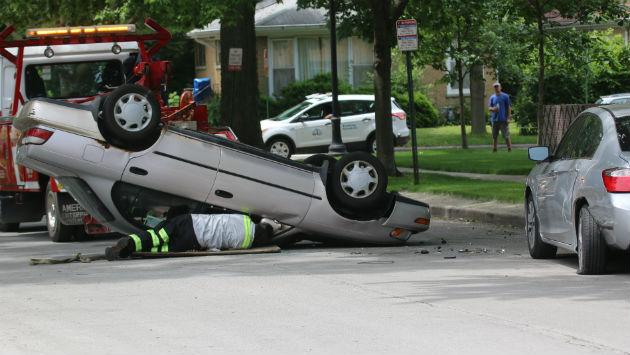 Evanston police were on the scene this afternoon of a rollover accident that occurred in the 1700 block of Mulford Street in south Evanston.

Update 2:25 p.m.: Police Cmdr. Joseph Dugan says an 18-year-old Evanston woman driving the car reached down to put her purse on the floor and as she did so her car struck a parked car. The front end of her car became caught in the wheel well of the second car, causing her car to flip over.

The impact of the accident, which occurred about 12:47 p.m., also pushed the parked car into a third vehicle.

Dugan says the driver was taken to Evanston Hospital for treatment of cuts on her legs and will be cited for failure to reduce speed to avoid an accident.