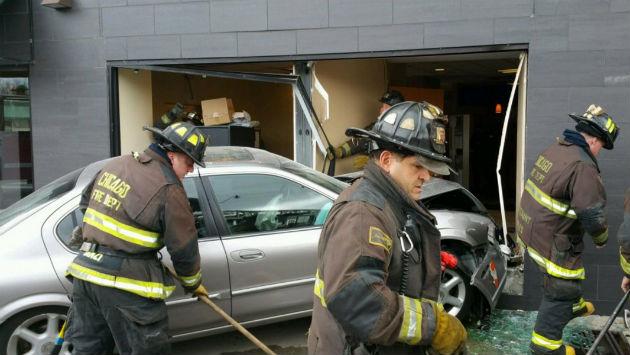 A car crashed through a window of the Chase Bank branch on Howard Street near Chicago Avenue this noon.

Although the bank is on the Chicago side of the street, Evanston police handled the accident report while Chicago firefighters cleaned up at the scene.

The driver of the car that crashed into the bank was injured and has been transported to St. Francis Hospital.

Chicago police are monitoring the exposed access to the bank until a boardup crew can close it up. Traffic was blocked on Howard until the car could be towed away.

Update 2:50 p.m.: Evanston Police Cmdr. Joseph Dugan says the car that ended up in the bank had been southbound on Chicago Avenue when it collided with another vehicle heading westbound on Howard.

The 89-year-old Chicago woman who was driving the car that hit the bank suffered a cut to her left knee and other relatively minor injuries.

A 20-year-old Skokie woman in the bank was hit by debris. She suffered cuts but refused medical attention. The driver of the westbound vehicle, a 28-year-old Evanston man, was uninjured. The bank is closed, probably for the rest of the day.

Dugan says police are still trying to determine the cause of the accident.