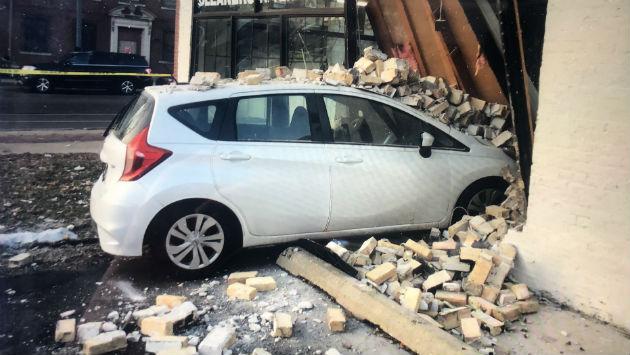 A car plowed into the Clean Wash Laundry at 807 Howard St. this morning — the second time that’s happened at that location in less than two weeks.

The Evanston Fire Department says the incident today happened around 6:47 a.m. in the parking lot just east of the building and that there were no injuries, but that a structural engineer has been called to the scene to assess the damage to the building.

Evanston Police say the white car that ended up partly inside the laundromat was traveling southbound in the 100 block of Elmwood Avenue when it was struck by a black vehicle that was westbound in the alley north of the 700 block of Howard Street.

The driver of the white car, a 60-year-old Evanston woman, lost control of her vehicle after the impact and it crashed into the laundry.

She was alone in her car.

She said the car that hit her was a black Nissan. Police say it fled the scene with heavy front-end damage.

The business remained closed this morning while it was examined by the structural engineer, but police say it may reopen later today.

Late in the afternoon of Nov. 30 another car plowed into the same wall of the building, but further back on the structure.

The car in today’s incident, after it was pulled back out of the building.