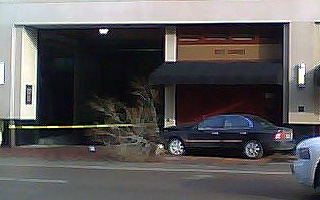 Evanston police say a car jumped the curb in front of the Sherman Plaza development on Davis Street this morning and struck a pedestrian.

Commander Tom Guenther says the car also knocked over a tree in the parkway and struck the building but didn’t do any major damage to the structure.

The pedestrian was transported to a local hospital with injuries that were not considered life-threatening.

In the wake of the accident police blocked off traffic on Davis between Sherman and Benson avenues for several hours and also closed the Davis Street ramp into the Sherman Plaza garage.

The driver of the car reportedly told police she didn’t remember what happened, that she may have blacked out. Passengers in the car said they were asleep when the accident occurred.

Police say drug and alcohol tests on the cars driver turned up no evidence of any illegal drugs.

The driver has been issued citations for moving violations and for damage to the city-owned tree.

Names of the driver and the pedestrian were not immediately available from police.