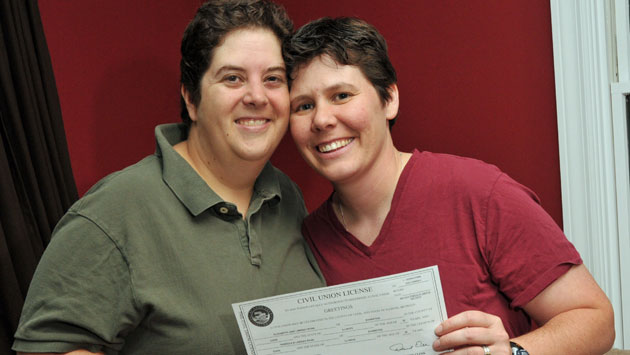 Elizabeth and Rebecca Lindsay-Ryan were among the half dozen Evanston couples who lined up earlier this week at the County Clerk's office to be among the first to receive Civil Union Certificates.

Elizabeth and Rebecca Lindsay-Ryan were among the half dozen Evanston couples who lined up earlier this week at the County Clerk's office to be among the first to receive Civil Union Certificates.

Elizabeth, or "Biz," (on the left in the photo above) says she and Rebecca, or "Becca," have been together for a dozen years and had a big ceremony with 220 friends and family eight years ago, declaring themselves "married" long before civil unions were legal in Illinois.

So they're planning just a small gathering tomorrow with a few friends and the minister who presided over the original ceremony.

Elizabeth told Evanston Now they've lived in Evanston since 2003 on the city's southwest side and are in their second home in town.

"We wanted a community that reflected our values and gave our children exposure to a lot of different families, to not have them be the only children of a gay couple in school," she says.

Elizabeth and Rebecca have a two-year-old daughter and nine-month-old twins — a boy and a girl.

Both teach at DePaul University's School for New Learning, which offers undergraduate degree programs to adults.

"We're very happy to gain the 650 rights provided to married couples under Illinois law by the civil union statute," she said, "but we're still waiting for the 1,100 federal rights married couples enjoy that we still don't have."

She added that "we're very fortunate to be surrounded by incredible straight allies who've added their voices and stood with us as we've fought for equality. We're so appreciative of them as well as others in the LGBT [lesbian, gay, bi-sexual, transgender] community who've been working for the cause."