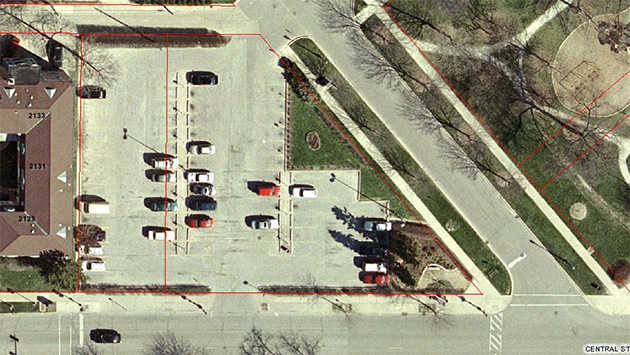 The city-owned parking lot at Stewart Avenue in the Central Street business district will get a new layout under a $419,900 contract scheduled to be approved by the Evanston City Council Monday.

A staff memo explaining the project says it will also involve creation of sidewalk bump-outs  at the Central-Stewart intersection that  should improve safety for pedestrians crossing Central Street.

The project will also replace sidewalks around the lot with porous concrete and add a bike shelter on Stewart north of Central in the west parkway.

And rearranging the parking spaces will make it possible to use the electric vehicle recharging stations recently installed at the south end of the lot. 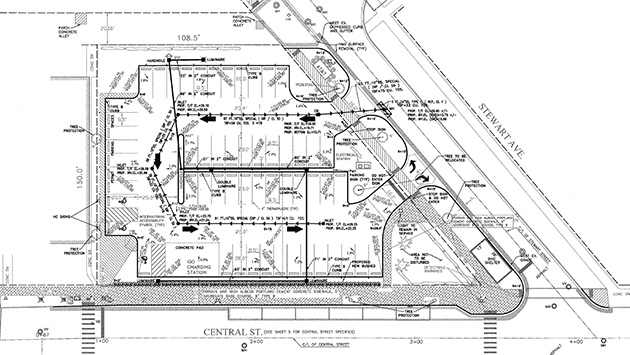 Top: A 2004 aerial view of the parking lot from the city's website. Above: a drawing of the plan to reconfigure the lot.

In 2007, the Central Street Master Plan suggested that traffic and pedestrian movement at the parking lot "may be improved by reconfiguring the parking lot so that it may only be accessed by a realigned Stewart. Realigning Stewart so that it intersects with Central at a 90-degree angle would also improve the efficiency of the intersection."

While the new project will move all access to the lot onto Stewart, Public Works Director Suzette Robinson says no realignment of Stewart is part of the project.

Staff is recommending that the contract be awarded to Chicgoland Paving Contractors of Lake Zurick, the low bidder among six firms that submitted proposals for the project.