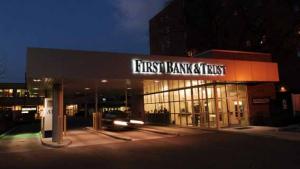 The chairman and CEO of First Evanston Bancorp, Inc., parent company of First Bank & Trust, told shareholders Tuesday that the bank should do as well or better this year as it did last year when earnings increased by 23 percent.

Presiding at the local bank’s 20th annual meeting, Robert Yohanan, managing director and chief executive officer, described his institution as “one of the best-performing in the country.”

In answer to a stockholder’s question about the stock’s current value, Yohanan said that, while the bank does not make a market in the stock, it was aware that the stock sold recently for $55 a share.

At that rate, a share of stock purchased when the bank was chartered in 1995 at the original offering price of $50 a share, would now be the equivalent of four shares, because of a four-for-one stock split in 2002, and would now be worth a total of $220 at $55 a share.

Yohanan said the major factor contributing to the earnings increase last year was growth in the bank’s loan portfolio, which resulted in higher net interest income during the year.

Among the new consumer services being tested before introduction this year, added Yohanan, is People Pay, which enables individuals to pay one another from their cell phones without writing a check.

This follows the successful introduction last year of an account feature that enables bank customers to deposit checks to their accounts by phone.