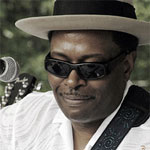 Chainsaw Dupont has defied and embraced the fates from day one. He was born on Friday, Aug. 13, 1956, in McComb, Miss., a town so small that shotgun houses were the norm, and grew up in Swan Lake in the Mississippi Delta, where almost everyone worked on the nearby plantation.

He ran away from home at 14, and went north with an older brother to Chicago's west side, attended high school and began to play guitar. Music has ruled his life since then, and he has traveled the country, playing in a wide variety of bands, including jazz, reggae and even backing up a black Elvis impersonator.

Chainsaw was homeless for a time, met a young Stevie Ray Vaughan, narrowly missed being killed by white supremacists and generally lived an itinerant life during that time, until settling back in Chicago in the late 80s. He caught the attention of blues harp legend Junior Wells, and hooked up for an international tour that included Japan, in the coveted spot as Junior's guitarist.

He continued writing songs with his manager/lyricist/producer Steve "MrBiG" Pasek, in a style he calls "Delta crush," a sort of industrial blues that would eventually see daylight in 2003 on "Lake Street Lullaby," a song cycle of 13 original tunes that documents the journey he and so many other bluesmen have made from the Mississippi Delta to Chicago, and marked him as one of the brightest songwriting talents on the Chicago scene today.

In 2005, he released “Bourbon St. Breakdown,” his second full CD, and the second part of a blues trilogy, contained another 13 originals, in a variety of Louisiana styles. In 2007, he released "Ghost Kings of Beale St.," a Memphis-themed record, to complete the trilogy. He's recently brought the tradition of live blues back to the Maxwell Market in Chicago while working on another release of originals.

This event is presented by the Fleetwood-Jourdain Theatre and the Evanston Recreation Division and will be held at The Theatre at Noyes Cultural Arts Center, 927 Noyes St. The show will take place on Saturday, Aug. 25 at 7 p.m. Admission is $12 in advance and $15 at the door. For box office information, visit www.cityofevanston.org/fjtheatre or call 847-448-8254.