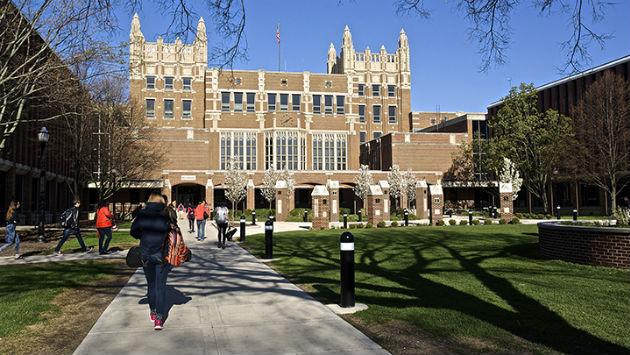 School officials say it still ranked in the 97th percentile nationwide and was the highest ranked school along Chicago’s North Shore.

The Post’s list ranks schools through a “Challenge Index” formula that uses a simple ratio: the number of Advanced Placement (AP), International Baccalaureate (IB) and Advanced International Certificate of Education tests given at a school each year, divided by the number of seniors who graduated that year. At ETHS, the “test-to-graduates” ratio is linked to Advanced Placement exams.

ETHS’s 2017 ranking drop can be explained by several factors: fewer students dropping out at ETHS, an increase in graduates, and more schools on the national list due to a greater effort across the country to promote AP participation.

Columnist Jay Mathews, who publishes The Post’s list each year, says, “There was a sustained increase in the number of schools that qualify through AP, IB, and Cambridge test participation, even though the vast majority of U.S. schools still do not make the list.” Nationally, groups like Equal Opportunity Schools have worked with school districts to promote near universal Advanced Placement participation among students.

Although not used to rank schools, The Washington Post reports each school’s Equity and Excellence (E&E) rate, which is the percentage of all graduating seniors, including those who never took an AP course, who had at least one score of 3 or above on at least one AP test sometime in high school. The E & E rate for ETHS was 50 percent based on 2016 data, more than double the national rate of 21.9 percent.