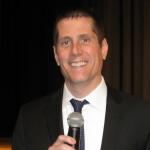 The superintendent of an economically challenged school district in Arizona made his case Tuesday night for becoming the educational leader of the Evanston/Skokie District 65 school system that serves more than 10 times as many students.

Dr. Nathan McCann, superintendent of the 600-student Altar Valley School District in the Tucson area, is one of five finalists for the Evanston job.

He told a public forum at the King Lab magnet school that “I can’t think of a better place to raise my kids” than in the Evanston school district.

A 1995 graduate of the University of Vermont with a major in political science, McCann said “I kept being drawn to being a teacher.”

He started out as a substitute teacher but soon discovered that he had a “passion” for teaching.

He earned a Master of Education degree in curriculum and instruction at Vermont and taught social studies in high school for six years “in a heavily free and reduced lunch district,” which is educational jargon for a school with a large number of students from low-income families.

The largest segment of students at Altar Valley is Hispanic, he said, followed in numbers by white, Native American, and African American. Because of the small size of the district, he serves both as chief executive officer and chief financial officer of the district.

He said he either supervises each area directly or he does it himself.

McCann was a classroom teacher and building administrator in multiple districts from 1999 to the summer of 2010, when he assumed the top position at Altar Valley. While there, he earned a doctorate degree in educational leadership at the University of Arizona in 2011.

He said he has a “genuine passion” for closing the achievement gap, which he chooses to call an “opportunity gap.”

To have any economic viability in America today, he said, one must be fluent in English.

In response to a question, he told his audience that he is “a very avid supporter of the arts.”

Each day this week, the district is holding a public forum for each of the final candidates in hopes of obtaining feedback from parents and others before the board makes an offer to one of the five, according to Board President Tracy Quattrocki.

Tonight, Evanston resident Paul Goren, who is senior vice president for program at the Collaborative for Academic, Social, and Emotional Learning in Chicago, will be featured.

Goren recently served as interim chief of the Chicago Public Schools Office of Strategy, Research, and Accountability, and was executive director of the University of Chicago Consortium on Chicago School Research.

Previously, he was a deputy superintendent for policy and strategic services for the Minneapolis Public Schools and was deputy director and senior policy analyst in the Educational Policy Studies Division of the National Governors’ Association in Washington.

He currently serves on the board of the Youth Organizations Umbrella in Evanston.