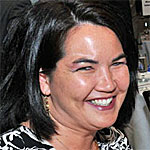 Eve Lederhouse resigned today as executive director of the Evanston Chamber of Commerce, less than a year after being appointed to the position.

Chamber President Dan Mennemeyer said the chamber plans to name an interim director soon while it conducts a formal search for a new executive director.

In the meantime, Mennemeyer said, the chamber plans to rely on its board members and other activists to run several upcoming events, including next month's legislative breakfast, the Fountain Square arts festival and the chamber's annual golf outing.

Sources said there'd been some friction around Lederhouse's leadership style, but Mennemeyer said the chamber has been reaching its goals for membership retention and new member recruitment.

Chamber membership is now at about 560, Mennemeyer said, but that's down from a peak of well over 600 before the recession.

Lederhouse, the former Eve Doi, who married after arriving in Evanston, was hired last April from Ames, Iowa, to replace Jonathan Perman, who'd served as the chamber's executive director for more than 18 years.