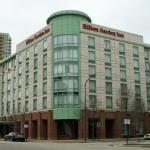 At a time of record low popularity ratings for government officials, Evanston's representatives in Washington and Springfield will show up for a breakfast session with Chamber of Commerce members at the Hilton Garden Inn Friday.

With the federal government just coming off a 16-day shutdown caused by a funding fight, polls are showing most Americans say they'd like to send their current representatives packing.

But political reporters at the Washington Post, interviewed for this video, say it's highly unlikely voters will actually turn most of the pols out.

With Illinois state lawmakers failing to come up with a solution to the state's pension crisis or other budget woes — their ratings are also in the basement.

If the technology gods smile on us, Evanston Now will have live video coverage of the event, otherwise look for a full report after it's over.