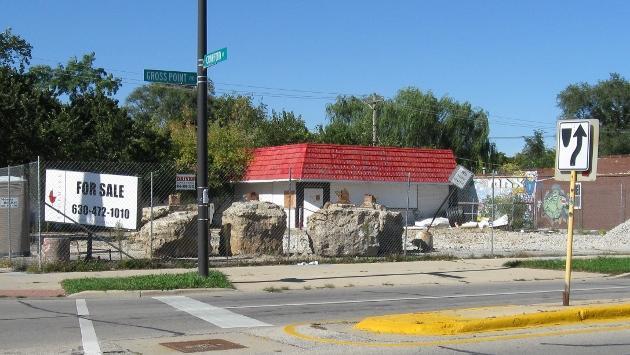 After nearly two years in the development stage, including major revisions in response to neighborhood protests, Chase Bank told Evanston Now Tuesday that it had decided against establishing a drive-through branch in far northwest Evanston.

A spokesperson for the bank, Christine Holavas, confirmed that the bank had decided not to establish the facility where Crawford Avenue, Gross Point Road, and Central Street meet at the northwestern entrance to Evanston.

While unwilling to give a definitive reason for the bank’s decision, Holavas said, “It just didn’t work out.”

The fate of the branch, whose initial design aroused controversy with residents in the area, was heralded around the first of October by a giant “For Sale” sign erected at the site, adjacent to a portapotty and mounds of dirt and rock, which remained since the underground gasoline storage tanks were removed in April.

A call to the developer last week revealed that the property was being “actively marketed” and that the Chase’s plans were “on hold.”

Sixth Ward Alderman Mark Tendam, when told of the bank’s decision, said late Tuesday he was “not surprised” and that he had put the chances of it going through at “about 50-50” when he saw the “For Sale” sign go up.

He said his efforts now will be directed principally toward restoring the appearance of the site, which is currently a significant eyesore at a major entrance to the city.

Initially, the bank proposed including the gas station, a vacant lot across an alley from it, and a third lot adjacent to it. But after residents complained that it was encroaching into a residential area, it eliminated the third lot from its plans.

Top: This is how the lot at Gross Point Road and Crawford Avenue looks today.