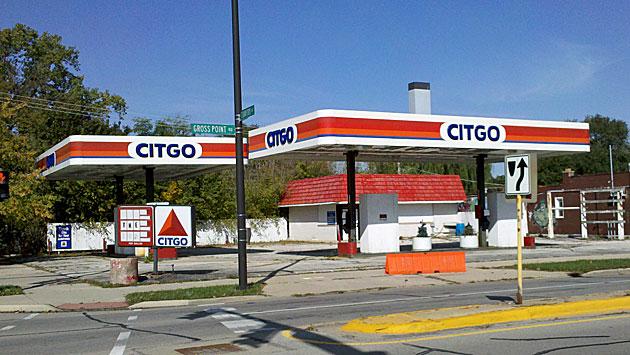 Edgemark Development, which is seeking zoning approval for a proposed Chase Bank branch in northwest Evanston, sought and was granted a continuance for its hearing before the Plan Commission Wednesday night.

The request came after city staff recommended that the project be scaled back — so that it would not intrude as far into an existing residential neighborhood.

The bank branch is proposed for a site on the northwest corner of Crawford Avenue and Gross Point Road that now is the site of an abandoned Citgo gas station. 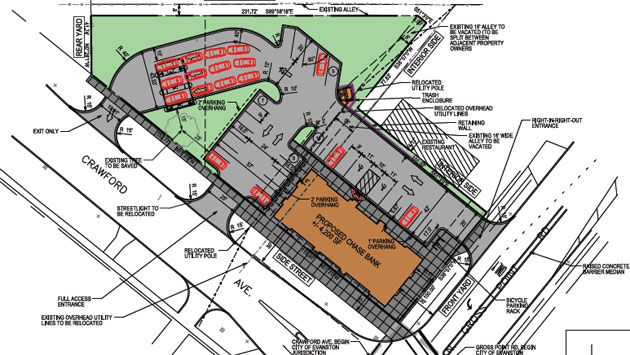 Top: The shuttered Citgo gas station proposed for the bank branch site. Above: The latest plan from the developers for the project.

The developers want to combine the gas station parcel with an alley and two residential lots just to the west on Crawford, to provide roome for a large drive-through facility and parking for 28 cars.

City staff is recommending that the project be trimmed to include just one of the residential lots — which is now vacant, and spare the second lot, which has an existing home on it.

Bent Hammeleff, of 2737 Hillside Lane, one of a group of neighbors who say they’ve gathered petitions from over 150 families in the area opposing the project, said after the continuance vote that he hopes the neighbors “have made a dent in Chase’s plan to just do their project as originally proposed.”

He said he hoped the next proposal from the developers “will reflect substantial changes.” 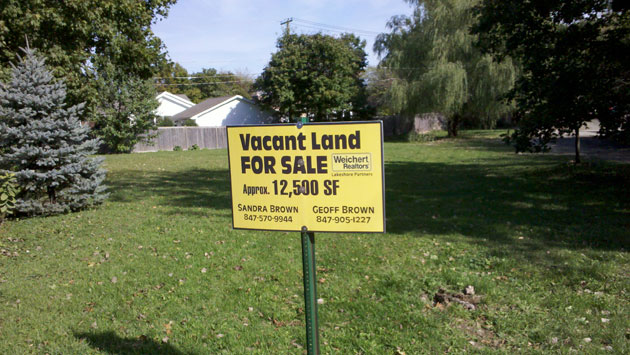 The vacant lot that would be included in the project under both the city staff and developer plans.

Hammeleff says the neighbors are concerned about extending commercial uses into the residential neighborhood and increased traffic from the bank.

Dennis Marino, who heads the city’s planning staff, said the version of the project recommended by staff would still give the bank room enough for the drive through and customer parking.

He suggested that bank employees might park in the same lot north of Sarkis restaurant on Gross Point Road that is now used for parking by employees of the nearby CVS drug store.

The new hearing on the bank proposal will be held at a Plan Commission meeting early next year.