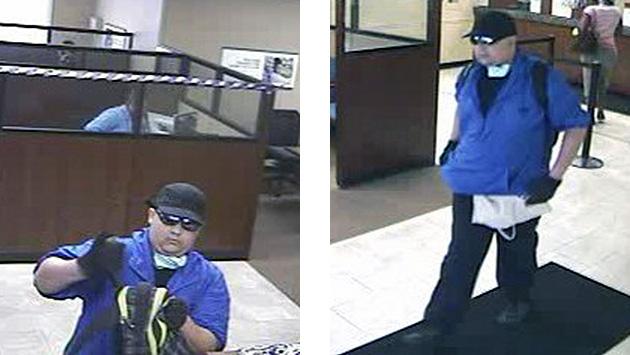 Update: 6:26 p.m. Evanston police now have released photos of the man they say stole $2,600 from the Chase Bank branch at 901 Grove St. in downtown Evanston about 3:30 this afternoon.

Police say these photos show the bank robber in the Chase Bank branch.

Update: 6:26 p.m.: Evanston police now have released photos of the man they say stole $2,600 from the Chase Bank branch at 901 Grove St. in downtown Evanston about 3:30 this afternoon.

Police Cmdr. Jay Parrott says the man approached a teller window, presented a note that implied he was armed with a gun and demanded money.

After receiving the cash he walked out of the bank and Parrot says surveillance cameras showed him heading east on Grove Street past Sherman Avenue.

Police stopped and searched Metra and CTA trains in an unsuccessful effort to locate the suspect. 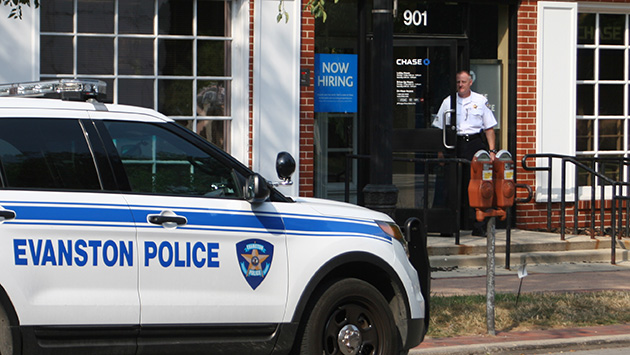 A police official stands at the door of the bank branch shortly after the robbery.

The robbery scene is less than a block from Evanston police headquarters, and since it occurred at shift change time, numerous officers were able to flood the downtown area looking for the robber.

Police now describe the robber as a white or possibly Hispanic male, 35 to 45 years of age and 5-foot-8-inches tall with a heavy build. He was wearing a black baseball style hat, sun-glasses, blue button down shirt, black pants and had a dark colored back pack with a green zipper.

The Federal Bureau of Investigation also responded to the scene to investigate the incident. No injuries were reported and no weapon was displayed.

Police ask anyone with information about the bank robbery to call the Evanston Police Department Detective Bureau at 847-866-5000, use the text-a-tip program by texting to CRIMES (274637) with EPD TIP in the message line or call the Federal Bureau of Investigation Chicago Field Division at 312-421-6700