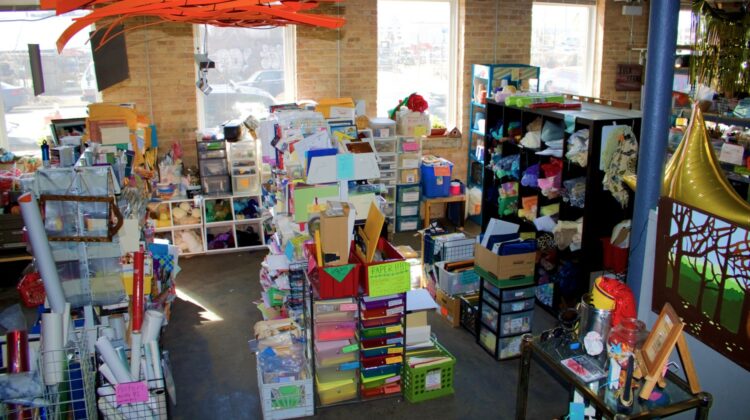 “Arts and crafts with the prices cut in half.” Okay, that’s not really the slogan of a store called The WasteShed, but it is a partial description of what the non-profit business has been doing the past seven years in Humboldt Park, and will start doing in Evanston some time in November.

It’s actually a recycling outlet for artists, teachers, and anyone else who might be interested in donating or buying “reusable art and education materials,” according to founder and executive director Eleanor Ray.

The items, such as needlepoint tapestry kits, paper, clay, books about arts and crafts, theatrical props, and many other things come in from previous owners, and go out with new ones.

Ray, an artist herself who sculpts and also creates costumes, says “my work is entirely in used media.”

Once she started working with recycled goods, Ray adds, “I never wanted to buy anything new again. I like working with items which have a history,” she explains.

Ray says the Humboldt Park store has tens of thousands of items for sale, many of which would likely have been thrown out and ended up in landfills were it not for a place where they could find new users.

“An incredibly diverse range of people are interested in the resources we have,” Ray says.

A tube of good acrylic paint for artists normally goes for $20-30, Ray says. But The WasteShed, she says, sells the same thing for $10-20. And no, it’s not a partially empty tube. Ray says sometimes materials come in from estates, or from an individual who started a project but never finished.

Ray actually planned to open an Evanston location in 2019. The Evanston Rebuilding Warehouse, a similar recycling concept for architectural and building supplies, invited Ray to set up shop in their facility on Hartley Avenue.

COVID-19 put that on hold, but Ray says the Warehouse “kept a light burning in the window for us,” so the WasteShed will be opening there.

Besides having items for sale, Ray also hopes to have workshops and classes in the new facility, ranging from sewing machine repair, to mosaic work, to “DIY pinata making.”

“I think we’re gonna have some really fun stuff going on over there pretty soon,” she says.

There will be a pre-opening event on Oct. 8. For more information about that, as well as about employment, volunteering, or donating, email [email protected]