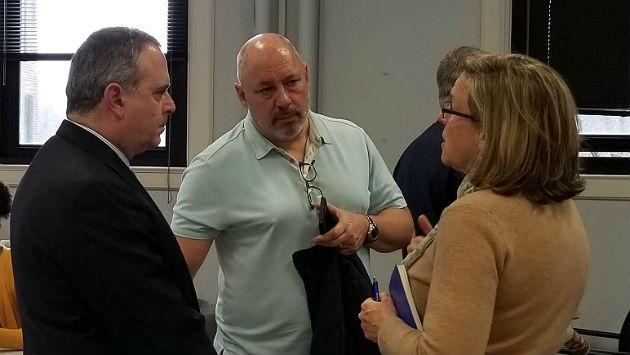 Evanston city staff briefed two Chicago Avenue property owners this afternoon on what they might be able to build on their properties, which span the west side of the block that runs from Greenleaf to Lee streets.

Autobarn owner Richard Fisher told the Design and Project Review Committee that with the opening of his new service center off Howard Street in the southwest corner of Evanston, he potentially could close his remaining service operations on Chicago Avenue and only maintain his three retail showrooms there.

If he could consolidate the showrooms on the east side of Chicago Avenue, Fisher said, it would benefit the neighborhood by eliminating the noise from the repair shops that now are just across an alley from homes facing Hinman Avenue.

Oscar Tatosian of Oscar Isberian Rugs, said he’d like to have a better-looking store than the one his grandfather built in 1928.

He said he hoped a new store could look more like the one his family also operates in the River North neighorhood of Chicago, with “higher ceilings and a better customer experience.”

He said a new location for the rug store could either be in the redeveloped site in the 1000 block of Chicago Avenue or at a property the family owns in the next block south.

Alderman Melissa Wynne, whose 3rd Ward includes the block, said, “I’m really pleased that these two have come forward and started to talk to us.”

Addressing the two business owners, she said, “Development in Evanston has been described as a blood sport, and I don’t want that to happen to you.”

Typically the project review process begins when a developer submits a fully developed plan for a new building after agreeing to purchase a site from a long-time owner.

By starting the conversation with the current long-time owners, Wynne said, she hopes to avoid “the clashes that have happened too often in Evanston.”

“It should save you time and expense and save community residents time and emotional expense,” she added.

One of the three parcels involved is now zoned C1a while the other two are in the more restrictive C2 zone.

After hearing the zoning limits described by staff, Fisher said the zoning would need to be switched to C1a for the entire site to make any redevelopment feasible.

With C1a zoning and the available bonuses for planned developments and on-site affordable housing, a building in that zone could be as much as 106 feet tall and, given the roughly 66,000 square foot size of the property, it could potentially have about 300 dwelling units.

Suggestions from city staff members included minimizing the number of curb cuts on Chicago Avenue and creating an alley-like entrance off Greenleaf Street at the rear of the property for access to parking and for service vehicles.

They also suggested that, with a property roughly 600 feet long, any design shouldn’t end up looking like “a big box” and should vary in height in different sections.

And they said the city would want to see a wider sidewalk than what exists now on the site — one at least 12-feet wide — similar to one at the recent Trader Joe’s development a block north of the site.

Lara Biggs of the Public Works Agency said a new development would need to replace the six inch water main in that section of Chicago Avenue with a 10 or 12 inch main — a project that could add perhaps $700,000 to the development’s cost. But she said the sewer line in the street is big enough to handle a new development.

While neighbors were invited to attend today’s DAPR session, no residents offered any comments.

Another meeting to seek neighborhood feedback is planned for 7 p.m. Thursday, April 4, at the Autobarn Mazda dealership, 1015 Chicago Ave.