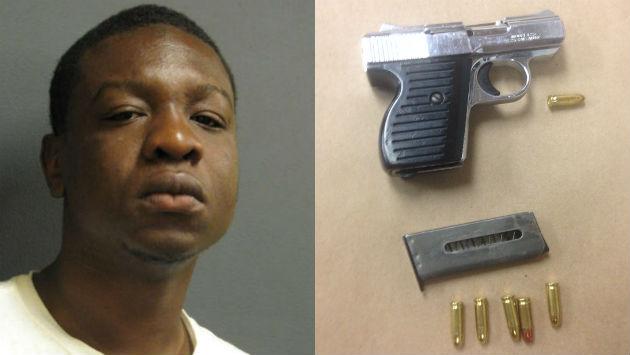 Evanston police say at 22-year-old Chicago man has been charged as an armed habitual offender after he was spotted carrying a gun in the 300 block of Howard Street Wednesday night.

Cmdr. Joseph Dugan says officers on patrol in the 300 block of Howard saw a man riding eastbound on Howard who kept adjusting an object in his waistband.

When the officers tried to speak with him near Howard and Marshfield, Dugan says, the man,  Valgas Etheard, fled northbound on the bike, then fell off the bike and ran westbound on foot.

Dugan says that the officers chasing the man saw him duck down near a bush, make a throwing motion and immediately get up and change his direction running southbound directly at one of the officers.

Fearing he was about to be battered, Dugan says, the officer deployed his Taser, which had an immediate affect and Etheard was taken into custody, and police recovered a Lorcin .25 caliber handgun from the bush area.

Etheard, of 7200 N. Claremont in Chicago, in addition to the armed habitual offender charge, faces two felony counts of unlawful use of a weapon by a felon and misdemeanor charges of possessing a firearm and ammunition without a firearm owner's ID car and obstructing a peace officer.

The Illinois Department of Corrections also issued a parole violation warrant for him.