An 18-year-old Chicago man is being held on $1 million bond in the shooting of a Skokie man in an Evanston alley last September. 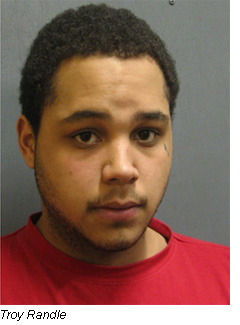 Police say it took months of investigation and cooperation from the victim’s family and friends to bring about the arrest of Troy Randle, 18, of 2216 Thome in Chicago, on attempted murder and other charges in the case.

Commander Thomas Guenther says that, because of the nature of his injuries, it was months before police were able to interview the victim, Seneca Nelson, 27, of the 4900 block of Hull Terrace in Skokie.

He was shot in the head and chest about 6:30 a.m. on Sept. 18 in an alley in the 800 block of Case Street, just east of Ridge Avenue and north of the Skokie Swift tracks.

Police offered no information today on a motive for the shooting, but at the time of the incident said it appeared to be drug related, saying that Nelson had numerous criminal convictions, including seven for drug law violations.

Randle was arrested Wednesday and appeared in district court in Skokie Thursday.