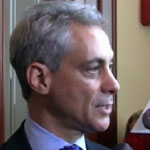 The first-term mayor laid out a plan to fix Chicago's pension funds, which are unfunded to the tune of $20 billion, about 46 percent.

Emanuel said during an Illinois House Personnel and Pensions Committee hearing that he wants to stop, for a decade, cost-of-living-adjustments for current retirees.

"We need to hit the pause button, so the entire system can catch its breath," Emanuel said.

Emanuel wants to increase the retirement age by five years for the city's retirement systems and asked that employees kick in 1 percent more to their pensions every year for the next five years.

Emanuel's plan has similarities to one Gov. Pat Quinn laid out several weeks ago for fixing Illinois' ailing pensions, which have an unfunded liability of $83 billion.

"We have a lot of work to do in the next couple of weeks to get this done, and we need to get it done," the Oswego Republican said.

He said neither Emanuel nor Quinn have put their ideas in legislative form.

"Mayor Emanuel is wrong to propose that city employees and retirees should now be forced to bear the lion's share of the burden for fixing a system damaged by shortsighted politicians and reckless Wall Street speculators," Henry Bayer, executive director for the public union the American Federation of State, County and Municipal Employees Council 31, said in an email.

Bayer says the average pension for most AFSCME-represented Chicago retirees is just $31,000 a year.  And that modest amount is all they have in retirement," he added, "because unlike every private citizen, city employees don’t receive Social Security."