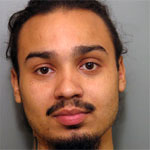 Shawn Wawryk, 21, of 5828 N. Spaulding Ave., was arrested by Chicago police Tuesday for a burglary there.

Under questionning by Chicago officers, he reportedly provided information about burglaries in Evanston in the 2400 block of Marcy Avenue on Nov. 5 and in the 3200 block of Hartzell Street on Tuesday.

After being interviewed by Evanston police he now faces felony burglary charges in the two incidents in which electronics gear, jewelry and coins were taken from the homes.

He's scheduled to appear in Skokie district court at 9 a.m. on Jan. 3.