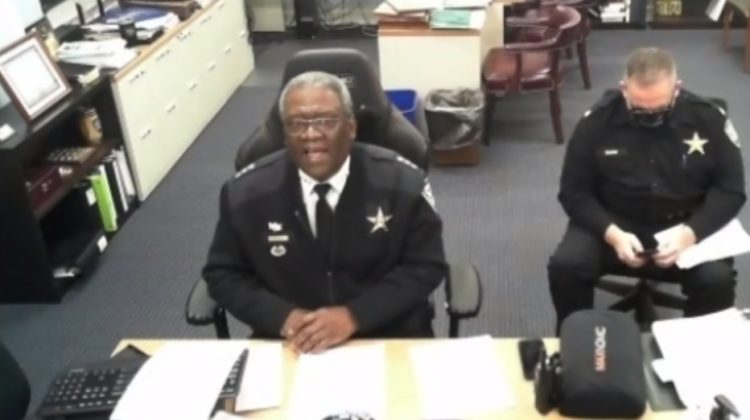 Evanston Police Chief Demitrous Cook strongly defended how officers handled a series of anti-police protests in Evanston, including one which turned violent on Halloween night.

In a virtual meeting of City Council’s Human Relations Committee Monday evening, Cook said calling in outside officers under a mutual aid agreement was absolutely appropriate and necessary. “Some students wanted to create havoc in our town,” he stated.

Cook said he authorized bringing in officers from NIPAS, the Northern Illinois Police Alarm System, a collaborative of about 90 police agencies from five counties. NIPAS responds to SWAT situations, demonstrations, natural disasters or other incidents where a local police department does not have enough people.

Questions about NIPAS’ accountability and policies were raised recently by Northwestern journalism students Alex Harrison and Zach Watson, in articles in the publication Scene and Heard.

Chief Cook contrasted the anti-police demonstrations with those earlier in the year by Black Lives Matter. The approximately 20 BLM protests in front of EPD headquarters, he said, were uniformly peaceful. However, Cook said, when the different group, calling for the abolition of the Northwestern University Police Department posed a potential threat, it was time to call in NIPAS.

Cook said NIPAS was involved in crowd control for ten incidents, and remained nearby on call for seven others related to the group “NU Community Not Cops.” While NIPAS member departments pay for their own officers, Cook said, responding to the anti-police demonstrations cost his department more than $88,000 in personnel related costs, including overtime. Cook called that “devastating” at a time when the City has eliminated police positions.

Cook said officers showed great restraint over the course of the anti-police demonstrations. Only one student, he said, was arrested, while four officers were injured in the Halloween night incident.

“The line was drawn,” the chief said, when some of the 300 downtown protesters became violent, throwing objects and shining lasers into police officers eyes. He said there is video of what happened, and more arrests of students are possible. “If you view the video,” he added, “we acted responsibly.”

Alderman Eleanor Revelle, 7th Waard, expressed concern that NIPAS officers may not “follow the same care and concern” that Evanston police show citizens, including students. Referring to NIPAS, Revelle said, “They are really scary people. They don’t look like Evanston.”

But other alderman, while saying they want NIPAS to follow clear expectations of appropriate standards, agreed with Cook that the demonstrators, not the police, caused the trouble. Alderman Peter Braithwaite, 2nd Ward, said, “There was violence” that police were responding to. “It was the violence which required the use of outside police,” he added.

Chief Cook said he wants policing to be as “unobtrusive as possible” in allowing peaceful protests to take place.

Cook said, “I’m not here to be an adversary.” He added, “If I did wrong, I admit it, come up with a plan, and beg for forgiveness.” But when it comes any reason for admitting wrong and asking for forgiveness, the Chief said, “I haven’t seen it yet.”