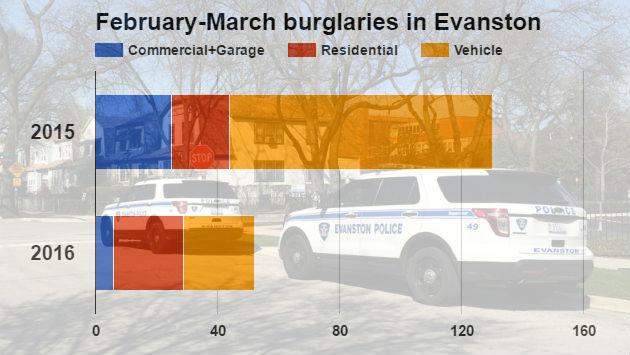 Evanston Police Chief Richard Eddington says the "high-visibility" patrols the department has conducted in recent months have been getting results in reducing crime in targeted neighborhoods.

Eddington says the new patrols — which have teams of officers focus on a single block or other small geographic area where citizen complaints or the latest crime reports show an upsurge in problems — was initially a response to resident concerns about an outbreak of daytime shots-fired incidents.

"Fortunately no one was hit in most of those incidents," Eddington says, but that these events occurred during the daytime "really heightened community concerns."

Eddington says police had been focused on a more covert burglary suppression program that had steadily driven down the number of burglaries in town over the past five years.

But with the daytime shootings, he concluded the department needed a response that made it visible to both offenders and the community that the police were engaged in addressing the issue.

Eddington said he believes other police efforts that started before the high-visibility patrols have also helps reduce crime. Those include a continuing focus on gun arrests that between September and the end of 2015 led to seizure of 31 handguns.

And he said a stepped-up effort to enforce the city's nuisance premises ordinance also helped. Eddington said one location that had been the scene of over 70 police calls dropped to having just three.

The nuisance premises effort including working with landlords to evict problem tenants, and he said removal of just one family from a building on Emerson that "was intimately involved in the violence" there has also contributed to the overall dip in crime.

Police Cmdr. Joseph Dugan says says the department has seen an especially dramatic decline in burglaries from cars with the new patrols. They dropped from 86 incidents in February and March last year to just 22 in the same period this year.

Commercial and garage burglaries also dropped — from 25 to 6 — but home burglaries increased moderately, from 19 to 23.