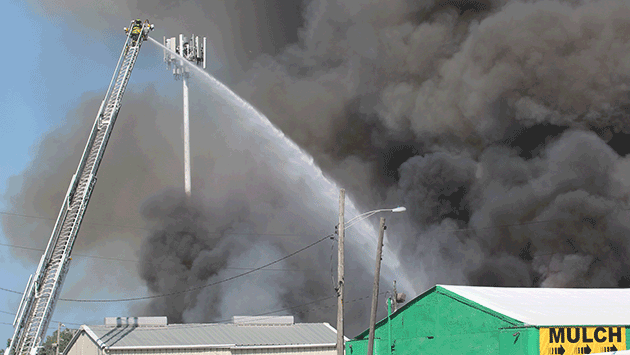 In the wake of Sunday's major fire on Oakton Street, Evanston Fire Chief Greg Klaiber says additional fire hydrants may be needed near the fire scene.

Klaiber says the shortest of the several hose runs firefighters had to put down to get to the North Shore Towing blaze was 500 feet,

"We want to keep hose runs under 300 feet," Klaiber said, "so that's something we'll be looking at."

Although firefighters during the blaze that poured heavy black smoke over the city reported trouble getting enough water onto the fire, Klaiber said that crews were able to tap into four different hydrants.

And, "once we called the water department to increase water pressure, everything was good," Klaiber said.

Klaiber said he'll be talking to the city's water department to see if it's possible, based on where the water mains are, to add additional hydrants in the area.

The chief said he also plans to meet with the city manager and the city's law department to review whether the towing company can be billed for the cost of hose lines and other equipment that are now unusable after being contaminated by oil and other chemicals from the junked cars that burned in the fire.

Under Title 9, Chapter 12 of the city code, the owner of any hazardous material is liable for city costs incurred as a result of the release of the material.

Klaiber said he doesn't have any indication at this time that the towing company was in violation of any city regulations in its operation of the yard.

The yard was the scene of another major blaze in 2006.

"The fire load there is substantial," Klaiber said, "with all the petroleum products in the cars and tires and the remnants of whatever's left in the fuel tanks, with the cars all piled up on top of each other."

"Hundreds of cars were involved" in Sunday's fire, Klaiber said, making fighting the fire very difficult. Fire crews spent six hours at the scene — much of that time putting out small fires scattered around the yard after the main blaze had been extinguished.

"But fortunately no structures were involved," the chief added, "and there were no injuries to any of the firefighters" from Evanston or any of the several towns that responded to the mutual aid calls.

North Shore Towing has long provided towing service for the city's police department, and its contract was renewed in July. Officials then said its the only towing company in the city with a yard big enough to store cars towed for parking violatoins.

Klaiber says it will be difficult to determine what caused the blaze, given that cars piled on top of each other had to be pulled apart so firefighters "could get at hidden and embedded fires" in the stacks of vehicles.

"We have a rough idea of where the fire started in the yard, but the exact nature and cause will be really difficult to determine," he said.

Only one worker, a dispatcher, was on duty at the yard when the fire was first called in by customers in the parking lots of the nearby Sam's Club and Home Depot stores.

Despite speculation that someone angry about having a car towed might have had a hand in starting the fire, Klaiber said there is no indication at this time that any malicious act was involved in the fire's origin.