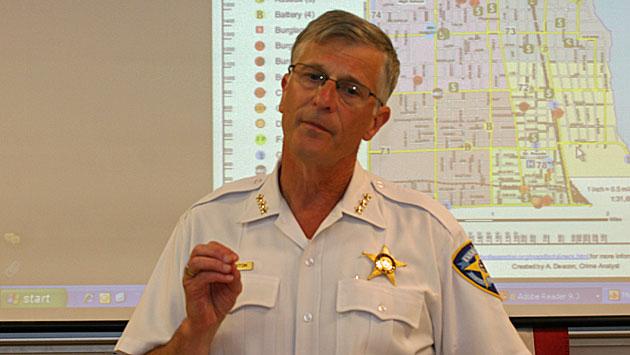 Police Chief Richard Eddington, at a weekend meeting to highlight the department's proactive efforts to fight crime, said the number of people in Evanston willing to engage in gun violence is "extremely small."

Police Chief Richard Eddington, at a weekend meeting to highlight the department's proactive efforts to fight crime, said the number of people in Evanston willing to engage in gun violence is "extremely small."

The chief, responding to a question from a resident after officers discussed how they'd arrested a convicted felon in Reba Park last week who allegedly was carrying a gun, said he believes less than 100 people in Evanston are carrying guns and willing to shoot.

That's a little over one person per thousand out of a population of 75,000.

Eddington said crimes of violence also tend to involve small groups of people who are also engaged in other criminal activities like drug dealing — and the guns come out when they try to settle disputes among themselves.

Of the six homicides the city last year, the chief said, five "involved the aquisition of narcotics," and the sixth grew out of a drunken brawl between two friends. 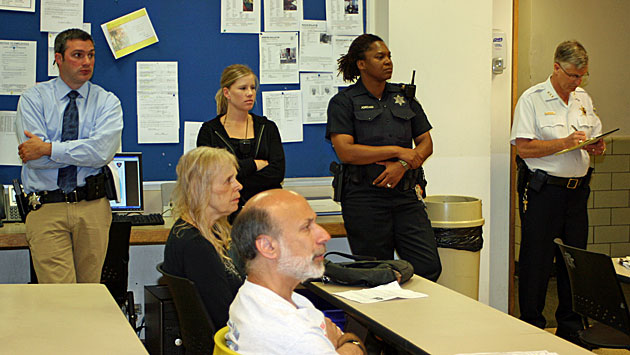 Officers and residents at the meeting.

The main focus of the Saturday evening meeting at police headquarters — the first of three the department has planned — was to detail the deployment strategies the department is using to try to place officers where they can have the most impact in stopping crime.

The handful of residents who turned out were shown the maps prepared for weekly meeting of department officials each Wednesday, at which they decide where to put extra officers on patrol, based on where there have been recent outbreaks of criminal activity. 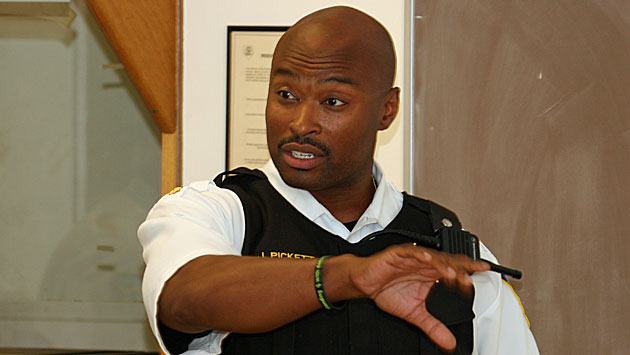 Cmdr. James Pickett, who supervises the department's 3 p.m. to 11 p.m. patrol shift, said that this time of year a lot of extra resources go to "order maintenance" in the downtown area with kids out of school.

Eddington said the targeted deployment strategy is particularly effective in dealing with burglaries and robberies, because often thieves who find success in a particular area will come back and hit the same neighborhood again.

Eddington said the approach, popularized by former New York and Los Angeles police chief William Bratton, who's now being considered as a potential consultant to the British government after riots in London, has contributed to 13 percent and 12 percent reductions in crime in Evanston in the past two years.

Police officers "are our most expensive resource," Eddington said, and this technique helps make the best decisions about how to deploy that resource in difficult economic times. 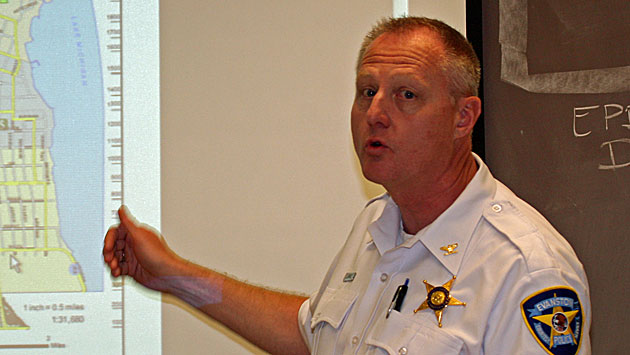 Deputy Chief Jeff Jamraz showed off another resource — a growing number of surveilance cameras located at various intersections around the city.

Jamraz said that real-time feeds from the cameras to computers at police headquarters frequently let supervisors and dispatchers see what's going on at a location when police have been called respond to reported criminal activity. 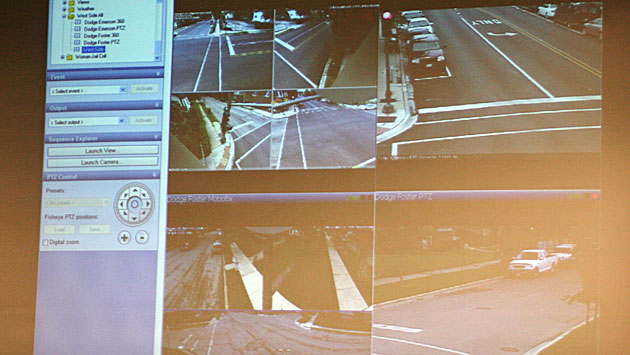 A projected image of live feeds from several of the department's surveillance cameras.

And, he added, checking recordings from the cameras afterwards can prove very useful in conducting investigations.