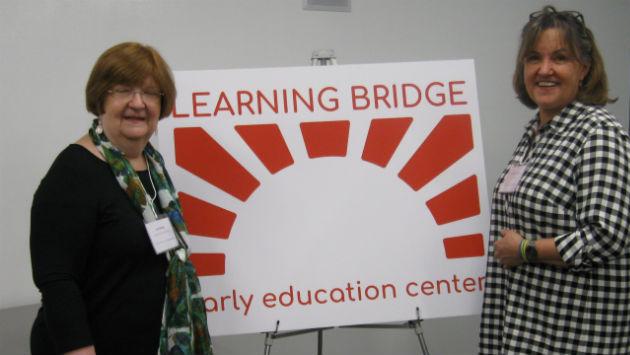 The Child Care Center of Evanston, established during World War II to care primarily for the children of veterans whose wives were working fulltime outside of the home, has become the Learning Bridge Early Education Center.

Its members and supporters were advised of the change at the organization’s annual meeting Thursday night by Board President Elizabeth Holding and Executive Director Lindsay Percival.

The center provides full-day services for children ages six weeks to five years of age. The infants are served by the organization’s Family Child Care Connections, a network of licensed home day care providers, while the center’s headquarters at 1840 Asbury Ave. has five preschool classrooms caring for children ages 2 through 5.

An active participant in Evanston’s Cradle to Career network, Percival noted that success in school, and ultimately in life, is determined largely by the quality of education and stimulation received by the child in the earliest of years.

In fact, organizations like Learning Bridge are a critical component in the community’s effort to cure the persistent academic gap that separates low-income minority children from their moderate and upper-income peers in the white community as measured by standardized tests.

Of the 180 children served by the center, about 80 percent of them are on special government assistance programs serving the low-income segment of the population, according to Holding.

The name change, Percival explained, was a result of a rebranding exercise performed over several months by members of the center’s Board of Directors to reflect the fact that “we are not just child care anymore.”

One of the highlights of the annual meeting was a presentation of an Award of Excellence bestowed upon the center by the Illinois Governor’s Office of Early Childhood Development for outstanding pre-school teaching and learning.