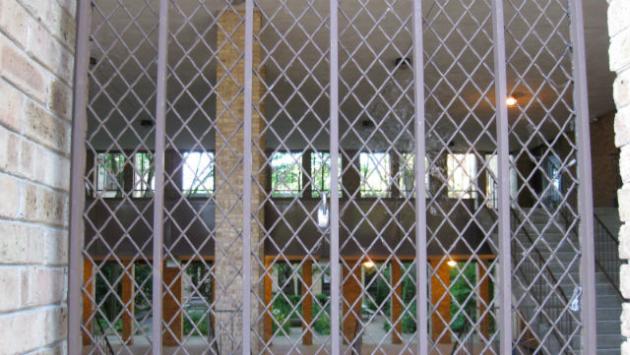 It began with a simple request by students and parents to remove the bars at the entrance to Evanston’s Chute Middle School so that it wouldn’t resemble a prison. But now it has become a nearly $2.5 million job and has been deferred until later.

When the Finance Committee of the Evanston/Skokie District 65 School Board met Monday night, member Richard Rykhus asked administration officials why an initial estimate of $1.25 million has ballooned to $2,475,290.

When first proposed last year, some observers thought it sounded like a half-day job for a janitor with a ladder and a chainsaw. But it quickly became a remodeled “welcome center” for the school with a secure entry like those that were gradually being added to other schools in the district.

The administration’s consulting architect, John Castellana, explained that there were a few problems they hadn’t considered at first.

For one, the Fire Code required the newly designed entry to be sprinkled, which required installation of a new water line to the school.

And, of course, the renovation would be air-conditioned, and that would require a new electrical service to handle the increased power load.

When the project was put out for bid, respondents noted that much of the work would be too disruptive to be done during school hours, which meant that workers would be asked to work evenings and weekends, some of which would require overtime pay.

With limited funds available, the committee put work at the other two middle schools, Haven and Nichols, ahead of the Chute project and recommended to the full board that it reject the bids for the Chute work at this time.

Also, it was noted that Chute is included in capital projects planned for next summer, when roofing and masonry work, asbestos abatement, and flooring replacement, among other things, will be scheduled. The secure entry could presumably be added to that list.

In the meantime, board members Rykhus and Kim Weaver expressed concern that Chute may be getting short shrift compared to the other middle schools. Rykhus noted that three of the four elementary schools that feed into Chute are Title I schools that serve a large proportion of students from low-income families.

Was the board favoring the other schools over Chute?

Superintendent Hardy Murphy assured the board that such was not the case and suggested that Chute, built in 1966, was newer than the other two schools and perhaps was not yet in need of major work to the extent that other schools were.

Murphy added that the question is not “whether” the secure entryway at Chute will be done, but “when.”

Top: The controversial bars that prompted the $2.5 million move to develop a secure entryway at Chute.

Poll: What to do about the bars at Chute?