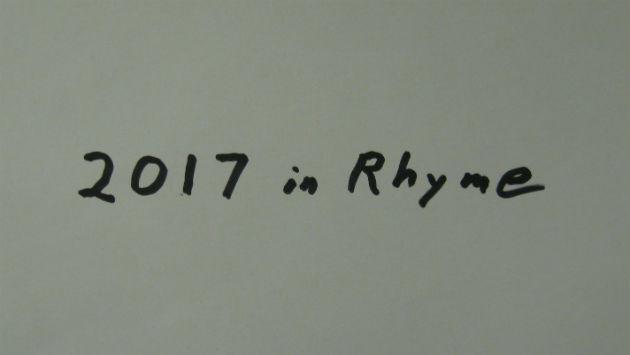 For years, Evanstonian Cindi Schuneman has entertained her friends with parodies of popular songs and humorous postings on Facebook, including today’s “2017 in Rhyme.”

A former president of the Woman’s Club of Evanston, Schuneman was a co-founder of the annual “Haven Help Us” show at Haven Middle School, choreographer of the McGaw YMCA’s annual “Brillianteen” show for 32 years, and a volunteer at the annual benefit for the Evanston Community Foundation.

When asked by Evanston Now for permission to reprint her yearend poem, she agreed, with the caveat that readers should be warned that it “is definitely skewed to the more liberal perspective.”

Now that you’ve been warned, here is Cindi Schuneman’s “2017 in Rhyme”:

Sucked all the joy from the triumph at Wrigley

Flynn and Manafort turned out to be liars

If any Trump staffer talked to Russia at all

People in Flint were in need of clean water

The climate and Ryan Gosling got hotter and hotter

Gays in Australia can legally marry

An actress from NU is engaged to Prince Harry

Mexico’s not going to pay for the wall

Roy Moore lost, is still banned from the mall!

GOP voted cuts for the rich and their taxes

We stared at the sun wearing just cardboard glasses.

Kim Jung Un and our Prez traded insults and threats.

Inauguration crowds for 45 are inflated

Every Kardashian’s been impregnated!

Women marched, “me too” was chanted

Bitcoin – the currency no one understanded

United passenger dragged off a plane

The opioid crisis, the fight against ISIS,

Gone is civility, class, even niceness!

Yet still no gains in gun control!