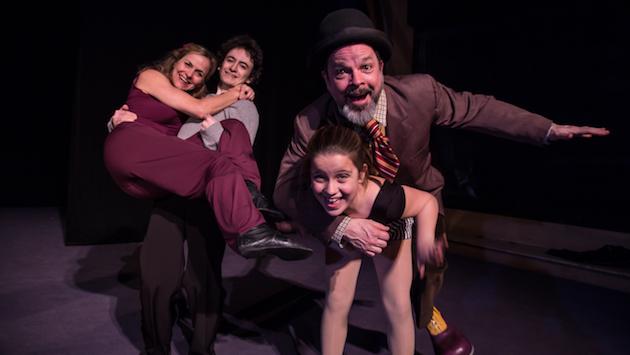 The Actors Gymnasium’s current production of “Marnie and Phil: A Circus Love Letter” represents more than the work of a winter circus; it unfolds multiple tales of lifelong friendship and family for Artistic Director Sylvia Hernandez-DiStasi and David Catlin of Lookingglass.

“David [Catlin] and I have not been apart for about two years,” says Hernandez-DiStasi. “We will continue to work almost nonstop for the next year. We were in Miami and we were playing around together in the pool, and the more time we spent fooling around during breaks in rehearsals, the more I was thinking- last time I did the winter circus was five years ago — in a cameo, and Catlin was in that one too. We’re all like family. That aspect of what I do is really important.”

“Marnie and Phil” is a generational circus, just as the winter circus normally is — but this time, the generations include both parents and children of real circus families who were incubated at The Actors Gymnasium. Hernandez-DiStasi and Catlin have children in the production, as well as “circus family” protégés who have been training with them since they were eight or nine.

“First of all it’s awesome because we get to do a show with our children; for me personally, to perform with my son is amazing,” said Hernandez-DiStasi. “I want to thank Chris Mathews for doing this show.

"My mom was born in Germany and given to a circus family. We’ve been talking about her story, working with Heidi Stillman [of Lookinggkass] to develop the script, and we’ve been interested in doing a show that spanned time. The lead performer is, in essence, playing a younger me.

"I was training in the circus and lost track of my friends because we didn’t have Facebook back then; so we’d send stacks of letters. There’s a scene where Phil is trying to keep track of a stack of letters, and that was my life!”

“This is a lyrical, upbeat show, but there are some moving moments — I might be a little bit close to this one,” said Hernandez-DiStasi. “A lot of the stuff Mathews has written, I would totally have said that. It’s like he was thinking, 'I’m gonna write it out and make Sylvia portray her deepest fears.'” 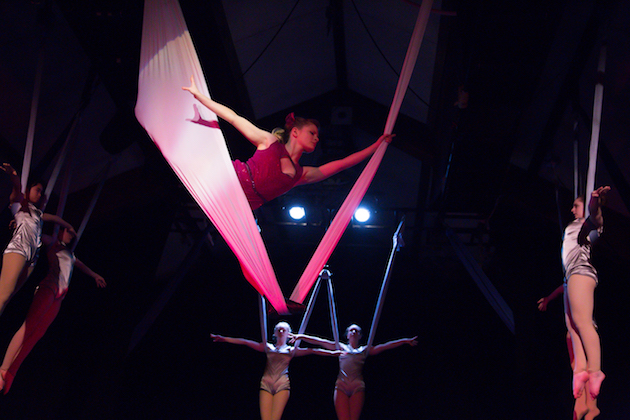 The story of Marnie and Phil is told by younger performers, 30-something performers, and 50-year-olds in Catlin and Hernandez-DiStasi. “When you get to the 50-year olds, it takes a little bit longer to recover,” said Catlin.

“But still, Chris Mathews has been able to watch this, and see that fire in the 50-year-old body that wants to do a certain trick. And there’s a part of me that wants to be able to do whatever the 30-year-olds are doing, and there’s a way we can figure it out, there’s a sense of play that makes me want to, and the story’s about that, when you’ve spent a lifetime doing that and your relationship to what you love changes. Gravity, time and complacency; all of those can change something you’re passionate about. Circus is the metaphor.”

“It was the other day when we were practicing that one scene that I was like, ‘Wow, I’ve known you for 20 years,’” said Hernandez-DiStasi to Catlin.

Catlin explained that “Master and Margarita” was the first show they collaborated on at Lookingglass, 20 years ago. “We wanted to capture flying, in the book,” said Catlin. “We took the Fall off to workshop and invest in training ourselves to incorporate flight- we met with a magician and Jeff Jenkins, who’s a clown who knew Sylvia- she’d just moved to town. We set up a meeting!” All before The Actors Gymnasium was born.

“Lookingglass had just started incorporating physical theatre,” continued Catlin. “David Schwimmer directed ‘Alice,’ that was very physical. So in the 80’s we took his Barmitzvah money and he directed us in a beginnings of a physical world; gymnastics, mostly on the ground. And as we were starting Lookingglass, we saw Cirque du Soleil in their early shows. What if you can tell a story and be pulled to the edge of your seat like that? Sylvia Hernandez-DiStasi could train us to do that.”

“We were very interested in spanning what theatre could be and finding a new energy,” said Catlin. “MTV came out with music videos and we wanted to choose live theatre, a vivid vocabulary. I believe you go to see theatre because it’s dangerous. Usually emotionally and circumstantially. Even if it’s a comedy, it’s about vulnerability. But with circus there is literal danger and trust. We often receive plays in an auditory way, but when you see a show The Actors Gym has worked on, you’re experiencing it in a visceral way.”

“It’s a powerful experience that students get here,” said Hernandez-DiStasi. “Putting yourself in danger in a safe way; you get a sense of accomplishment, fear that is overcome, and confidence gained. That is a powerful thing.” 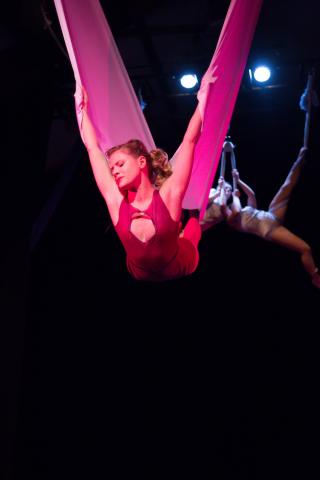 Later this spring, Catlin and Hernandez-DiStasi will be collaborating on a circus production of Shakespeare’s “The Tempest” at Northwestern . “They wrote me in to play Prospero,” said Catlin. “I’m sort of in the show and also mentoring.”

“We do a lot of hat swapping,” said Hernandez-DiStasi.

“Mostly I just feel really lucky. I’ve never had that thought, ‘I’m gonna do another show’ — every show is ‘the last show.’ And every time I’m standing in your face, I’m like, ‘I can’t believe I’m sharing the stage with David Catlin!'”

Catlin laughed, “We’re always on stage — just not in front of people.”

“I’m like all mushy and we’re playing good friends…it’s all been, for me, another crazy blessing,” said Hernandez-DiStasi. “I hate to use that word, but…I left the circus and moved to Chicago, and I was so alone, thinking, ‘Oh my god, what have I done?’ And then I started working at DePaul and I was like ‘Oh, I like this!’ I’d never worked in theatre before. And Lookingglass — I like this! Some of those friendships never go away. And I just love it. It feels like my family keeps growing and growing.”

“Marnie and Phil” runs now through March 20 at The Actors Gymnasium, 927 Noyes St. in Evanston. Tickets are available online.