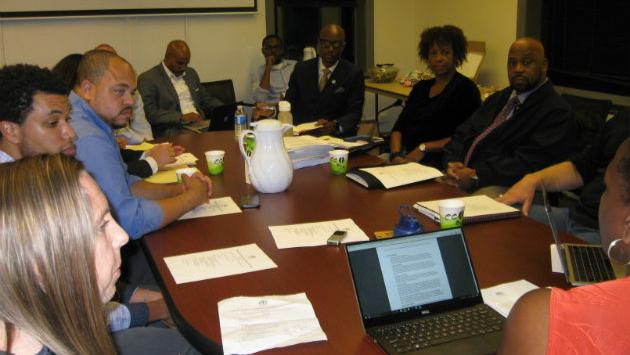 Mayor Steven Hagerty welcomed the group, told them why they were there, named attorney Matthew Mitchell its interim chair, then left the room to allow them to get to know each other and to begin their work.

Hagerty explained to the group that it is to report back to the City Council via the Human Services Committee with answers to these questions:

What issues, if any, are there with the current complaint process?

What is the complaint process for communities similar to Evanston?

Are there any nationally recognized best practices related to how municipalities that are similar to Evanston handle civilian complaints? Are there other best practices the Committee discovered?

What suggested changes can Evanston make to address any issues identified with the current process?

Are any of these suggested changes to the citizen complaint process included in the 27 point police issue work plan?

Much of the meeting was conducted by deputy police chief Aretha Barnes, who distributed an organizational chart of the department, a copy of the police union contract, the Peace Officer’s Bill of Rights, the department’s Rules Manual, and the Police Work Plan for the Human Services Committee.

Kimberly Richardson, assistant to the city manager, said the committee will likely meet on a monthly basis until its work is completed next May.