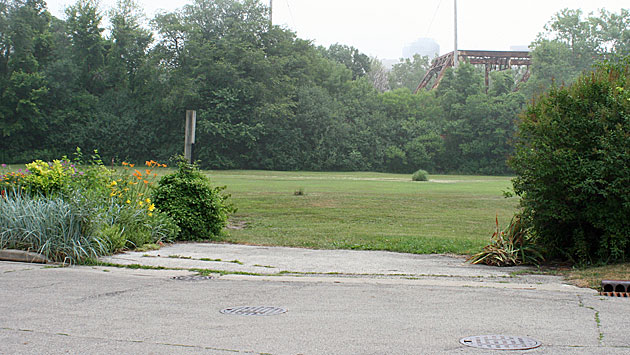 Both Parks Director Doug Gaynor and Alderman Jane Grover, 7th Ward, now say that the restriction to season ticket holders would apply only to the 17th and 18th holes, where tailgating, including alcohol consumption, would be allowed.

Anyone attending the game would be able to park on the 9th and 10th holes, but wouldn't be allowed to have tailgate parties there.

The memo prepared by Gaynor had described the restriction to season ticket holders as a way to assure that people parking on the course would be known to university officials and could effectively be penalized for game-day misbehavior.

She says the condo owners remain concerned both about the potential for game-day traffic congestion and about rowdy behavior by fans that she says occurred in years past when there was parking on the 10th hole.

The association that operates the Frank Govern golf course, on land leased to the city by the Metropolitan Water Reclamation District, is seeking to expand game-day parking from three holes to four this year.

It wants the additional revenue to help make up for declining golf income that has left it with over $20,000 in unpaid water bills to Evanston and Wilmette.

The aldermen Monday approved the parking expansion, subject to negotiation of a final agreement between the golf association and the university, and approval by the council of amendments to the city code to permit alcohol consumption on the golf course.

Grover, in an e-mail message Wednesday, said Northwestern's athletics department would manage parking and tailgating on holes 17 and 18 for season ticket holders only.

She said the golf association would manage parking on holes9 and 10 for drive-up, anonymous parkers.

She said parking on all holes will be pursuant to an agreement between the golf association, NU and the city "on the same or stricter terms" as previously applied to the three holes where parking was permitted last year.

For the 10th hole, she said, the agreement will incorporate specific provisions about protecting landscaping and vehicle ingress and egress, among other things.

The golf association, Grover added, has not yet determined whether it will choose to use holes 9 and 10 for football parking, dependent upon the attendant costs, but the Council's action gives the golf association that option.

Top: The driveway at Chancellor Street and Bryant Avenue that football fans would use to reach the 10th hole parking area.