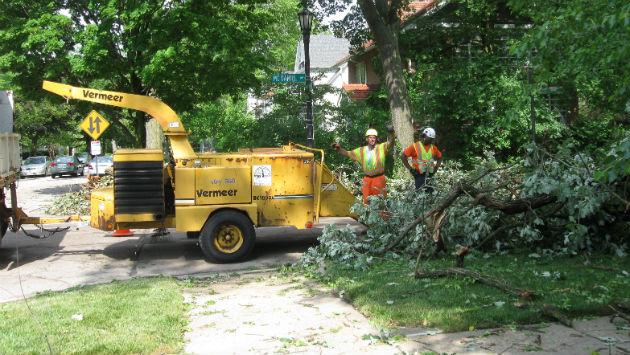 That microburst that hit Evanston Wednesday afternoon packed such a wallop that city crews expect to work through the middle of next week to clean it all up.

The city expects to have all the streets cleared by the end of the day today and will work on clearing alleys tomorrow.

In addition, he said the city will have two crews helping to clear and haul away the smaller debris from the parkways.

The worst damage from the storm, D’Agostino said, “seems to be in the area from Central to Colfax between Prairie and Ewing, but we have many reports all over, including Sheridan Square, the 2000 block of Main, the 500 block of Florence, the 600 block of Clinton, and the 3100 block of Hartzell—literally all four corners of the city.”.

He added: “I expect cleanup efforts will continue into the middle of next week.”

In addition to fallen tree limbs, he said, “there have been several vehicles damaged by falling debris, and we know of one home that sustained some minor damage as well.”

A resident of a condominium on the corner of McDaniel Avenue and Central Street told Evanston Now that when the microburst hit, “everything outside looked like it was moving horizontally.”