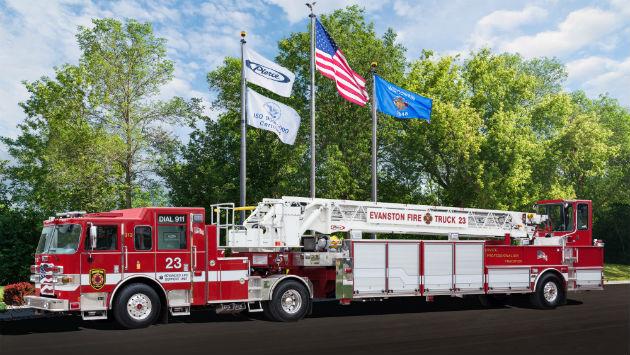 Evanston is expected to take delivery soon on a new million-dollar fire truck to replace one that's now 24 years old.

The new truck is scheduled for final inspection by the department at the Pierce Manufacturing plant in Appleton Wis., on Friday, says Fire Division Chief Brian Scott.

Then it will be driven to Global Fire Apparatus in Aurora for a post-delivery inspection. After that, Scott says, it will have its compartments outfitted with equipment and there'll be in-house training of crews before the rig is officially placed in service this fall.

The City Council approved purchase of the new truck just over a year ago, in August 2014.

The rear-tiller steered truck with a 100-foot aerial ladder is expected to have a 20-year life cycle and is being paid for with general obligation bonds.

The articulated tiller design of the truck is designed to provide a tighter turning radius to more easily maneuver Evanston's narrow streets.

Fire Chief Greg Klaiber told aldermen last year that the old Truck 23 will be sold for scrap once the new one is placed in service.

The city replaced its other aerial ladder truck in 2011 when it was 21 years old.