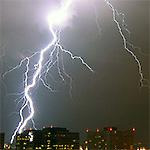 Evanston City Manager Wally Bobkiewicz says city offices will close at 3 p.m. today as a precaution ahead of expected severe thunderstorms expected to reach the city starting around 5 p.m.

In a telephone conference call with reporters, Bobkiewicz said that in addition to the Civic Center all the city's recreation centers, libraries and beaches would also close at 3 p.m.

The city manager said public works crews and other workers who may be needed after the storm will be asked to stay over at local hotels tonight, so they'll be able to quickly get to work after the storm passes.

Bobkiewicz said the effort would be in line with the city's efforts to respond to severe winter storms a couple of years ago.

No decision has been made yet about whether to open an evacuation center for people who may be forced from their homes by the storm. But Bobkiewicz said if there is a need to have an evacuation center, the Levy Senior Center is the most likely location to be used.

Bobkiewicz said Commonweath Edison has revamped its storm power outage reporting system since the last severe storms hit the city, and he urged residents to suffer a power failure to contact ComEd by phone at 800-334-7661 or online or by texting OUT to 26633 (COMED).

Residents are encouraged to call 311 or go online to report downed trees, road hazards or other storm-related information.

City officials urge residents to keep yards free of poles, shovels, bikes and other loose articles that could become hazardous flying objects during a severe storm and to exercise extreme caution around standing water, which can hide many hazards, including open sewers and downed power lines.

Update 6:50 p.m.: Northwestern University has cancaled evening classes and final exams on both its Evanston and Chicago campuses tonight. The University Library, Norris University Center and the Sports and Aquatics Center are also closed. Shuttle bus service is scheduled to remain in service but may be suspended